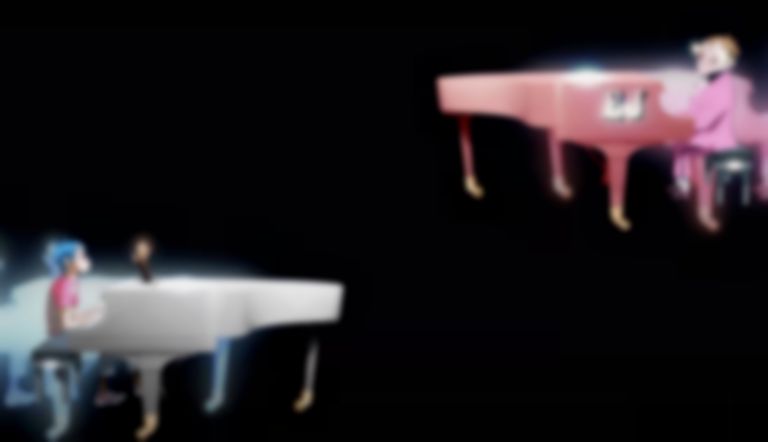 Gorillaz have joined forces with Elton John and 6LACK for "The Pink Phantom", the latest track to be shared from their upcoming album Song Machine: Season One - Strange Timez.

The new collaboration with Elton John and 6LACK follows on from their "Strange Timez" single featuring The Cure's Rovert Smith, which landed earlier this month.

Elton John says of the collaboration, "Damon reached out and asked me to do something and the way the song has turned out is just great. I was in the studio in London and he was at the other end in Devon, but even remotely it was such an engaging and creative process. I’ve always loved Damon because he encompasses so many different sorts of music. He has his fingers in so many pies and although he's achieved so much, he never sits still creatively. He's constantly pushing forward and embracing the new, which is admirable and rare. He’s always working - he’s always doing something. He’s done so much to promote music from around the world, from Africa, from China, that people hadn't previously heard and I really admire that. I’ve always been a Gorillaz fan anyway, so when he asked me to do a Gorillaz track - it was a no brainer. I’m so very, very happy that that’s come about."

Gorillaz have also shared six other singles from their forthcoming album, including ScHoolboy Q collaboration "PAC-MAN", Friday 13th" featuring Octavian, "Momentary Bliss" featuring Slaves and slowthai, "Désolé" with Fatoumata Diawara and "Aries" featuring Peter Hook and Georgia. Gorillaz also released "How Far?" with Skepta and the late Tony Allen in May to pay tribute to the legendary drummer.

"The Pink Phantom" featuring Elton John and 6LACK is out now. Gorillaz's Song Machine: Season One - Strange Timez album will be released 23 October, and is available to pre-order now.