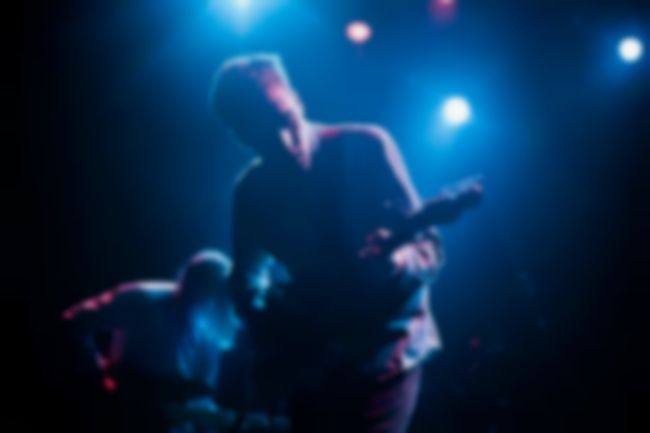 Amid a tumultuous storm that catapults buzz-bands around like puppets in its gale-force wake, Wild Nothing seem to represent a gently fluttering pocket of calm. Jack Tatum’s music noodles and meanders across fretboards, transporting you away to neon-drenched dream-scapes and sun-bleached beach houses with peeling enamel doors. London is currently plunged into an Arctic winter, and Spring has, at best, briefly peered round the corner before fleeing in retreat. It’s no wonder that Londoners fancy their fill of Wild Nothing, then, and Scala is suitably packed out for the occasion.

“We were talking backstage,” says Tatum, in a laidback drawl similar to his singing voice, “and we think this is the biggest club show we’ve ever played. This means a lot…you guys are awesome.” Sort of dreamily wafting his way around the stage with the roaming riffery of opening song ‘Shadow’, Tatum might be in a trance, but he’s delivering the plaintive undercurrent of Nocturne perfectly live. Hazy pink lights and pouring smoke set the mood. Wild Nothing are a formidably polished band live – the pulsing funk of ‘Paradise’ sounding even richer in the relatively intimate environment of Scala, and the whole room is moving almost unconsciously in time. It’s impossible not too, really. Nocturne is admittedly the record that takes centre stage here tonight, and 6 months after its release, Tatum’s effortless grooving and vague sense of wistfulness seems as exciting as ever.

Ambling from song to song with a deliciously feet-scuffing dawdle, Wild Nothing are less about exploding your ear-drums and far more about sheer atmosphere. ‘Disappear Always’, with its fuzz-riddled guitar is both lamenting and electric, and it’s a high point of the set where Tatum straddles the line between vulnerability and ‘owning it’ perfectly. The band also cover ‘Head Full of Steam’ from 80’s Australian band The Go-Betweens. It’s a beautifully executed spin on a song by one of Tatum’s favourite bands, and as carefully considered as you’d expect from such a refined musician.

Those expecting pyrotechnics and toppling microphone stands will have left Wild Nothing feeling slightly cheated, but we get the feeling that theatrics and rock and roll affectation just ain’t Jack Tatum’s style. He seems as casual on stage as he does in his bedroom where he first started writing, and Wild Nothing’s music has the rare, ethereal ability to transport you anywhere. This might be the biggest club show this American dream-pop outfit have played so far, but if tonight’s absorbing performance is anything to go by, there soon won’t be many clubs big enough to accommodate them.