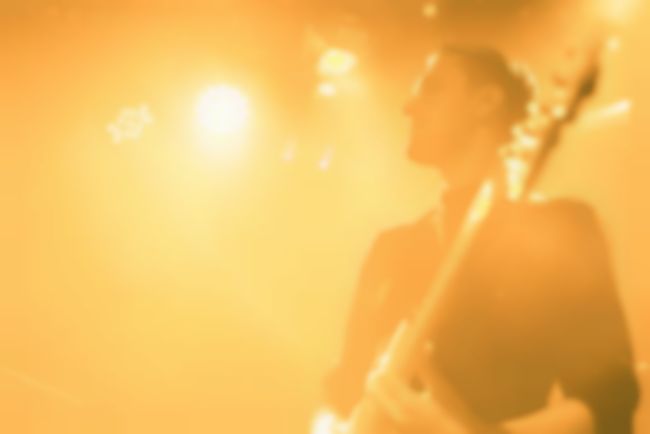 The past couple of months have seen Wild Beasts being spoken for by voices other than their own. From the wildly enthusiastic reception for full length number four Present Tense (not least the perfect review given in these metaphorical pages) to interviews skewing their words out of context against contemporary label-mate superstars, the critical cult greeting Wild Beasts has proven itself to be chomping at the bit.

Not that you’d realise from the band’s demeanour. They may have taken a short hiatus from the live arena, bar a few small-scale live shows at the tail-end of last year to showcase new material, but they approach a packed XOYO with a cool nonchalance and genuine appreciation. Seething songs about dark eroticism and the eventual apocalyptic revenge of our raging next generation are interspersed with casual chat and self-deprecating bonhomie. Tom Fleming even strips down to a vest.

However, tonight’s glimpse behind the curtain is all about them – a showcase of their sleek, blisteringly impressive new record to previous purchasers of tickets to their Brixton show in April. Their outfit may be physically smaller, with the return of keyboardist Katie Harkin to her native Sky Larkin, but the four-piece are as ravenous as ever.

They may have changed surroundings since the swashbuckling freneticism of first record, Limbo, Panto (of which “The Devil’s Crayon” is aired tonight), changing their Cumbrian home for a London one, but their latest manifestation bears the hallmarks of Kendal’s most famous export. The visceral frustration hardwired into the band’s genetics come reformed on Present Tense into a more complex, slow-burning aesthetic – a limber, lean sonic minimalism, exquisitely executed. If they once jittered with the sharp shock of an E-number induced high, their maturation sees them fuelled for the long-haul.

With the help of a booming sub-bass that registers songs like “Pregnant Pause” Richter-scale worthy, the live show brings the band’s intellectual proposition to life. The lick of every obtuse phrase leaves you reeling not just in its emotional pull but in the physical thrill of its pronunciation. Take the refrain in the extended coda for “Wanderlust” – “Don’t confuse me with someone who gives a fuck/In your mother tongue, what’s the verb ‘to suck’”? Co-frontman Hayden Thorpe describes the genesis of this lyric as rooted in being one of the most despicably obnoxious things he’d ever heard someone say – and performed live, their vocalising of this social ‘unsayable’ drips with venomous potency. Between themselves, frontmen Thorpe and Fleming achieve a vocal range and style all of their own, and watching two bodies interweaving vocally in the flesh adds an extra dynamic to the coherency of the yin & yang created on record – rather than presented with one rich tapestry, we can see the looping threads brought together.

The band are at their best at their darkest, most notably with the threat of “Daughters”, and its harsh strobe. However, the band prove themselves more than capable of a lighter touch, in the sleek pop of sure-single “A Simple Beautiful Truth”. As they dart around the stage between instruments (bar drummer Chris Talbot, who seems only stopped doing so by the limits of only having two arms) they prove both that they are not a band who had to learn to play with computers, as hinted at in interview, but very much the ones in charge – embracing the power of technology to boost their own idiosyncratic appeal. Case in point – the curious drum pattern to “A Dog’s Life” was on record built around a looped sample of a stick being bounced onto a snare, but is tonight impeccably carried off by the control of Talbot’s wrist alone. The band’s adoption of electronic wizardry is no forced gimmick, but a catalyst in the expansion of their already broad horizons.

It’s a warm return for one of Britain’s most accomplished guitar bands – rightfully reaping the rewards of their excellent fourth addition to an inimitable oeuvre. Beg, borrow or steal a ticket – and watch them justify the hype.

Wild Beasts’ latest album Present Tense is out now on Domino Records. Read our 10/10 review of the record here. The band are set to play Brixton Academy on 1 April, with tickets still available here. Photography by Howard Melnyczuk.