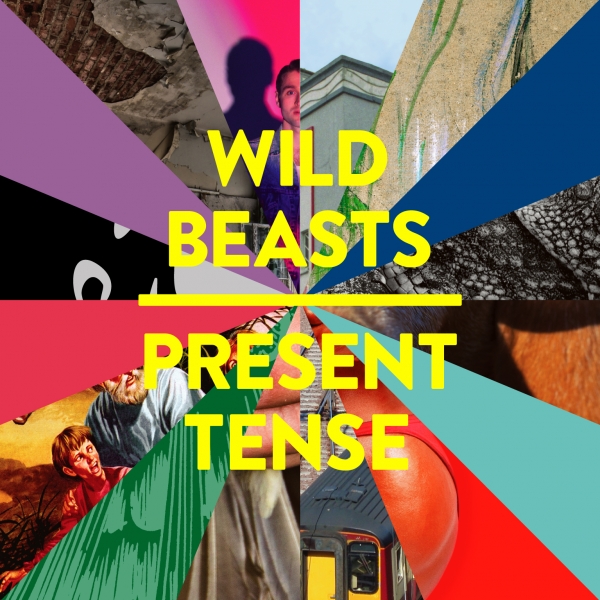 The fourth album from Wild Beasts begins with rage and ends in fragmented hope. Present Tense is an album that shows vast and cohesive development at all levels and take a fast and free gamble with an idea and a sound that could easily have failed. Yet through careful process, thought and order, the four piece avoids sprawling chaos and conceptual farce to deliver something quite transcendental: a modern classic.

An exploration of dehumanization dominates the record, book-ended by the class scathing of “Wanderlust” (“…decadent beyond our means/We feel the things they’ll never feel”) and the pensive gleaning at work on ambiguous closer “Palace” (“You remind me of the person I wanted to be/Before I forgot…We may be savage and raw but at the core we’ve higher needs.”).

Within this thematic framework the band lay out an impressive ten track distillation of post-millennial angst that manifests itself through music as much as words. While Smother found them scattering cut-and-paste electronica across the fabric of their songs,  Present Tense sees the same elements entirely absorbed into their creative DNA. The impact of this hits somewhere around album half-way point “Daughters”. A jittery Four-Tet percussive builds ominously under Tom Fleming’s references to Oppenheimer and the unforeseen consequences of humanity’s big decisions. Like the rest of the songs on Present Tense, there’s an almost cinematic feeling of discomfort, of being touched in a place that we’re not quite used to.

It’s uneasy; a sonically persuasive checkpoint notable also for Fleming’s incredible voice. His honeyed gruffisms have always been an impressive foil to bandmate’s Hayden Thorpe’s distinctive falsetto, but here they’re the most balanced we’ve ever heard them. Whether it’s two hander “Sweet Spot” or the Thorpe-heavy “A Simple Beautiful Truth” – which sees Fleming’s contribution as the lynchpin of the most pop-leaning song the band has pulled off – voices are used as honed, intricate brush strokes across the record. There’s a minimalism applied to everything and the ornate flourishes (lyrical as much as musical) the band are known for feel softer, simpler and more accessible but also more sophisticated. As witness – even voyeur – to the flirty, sometimes seedy and very British band of Two Dancers, we let ourselves become thrillingly complicit in Thorpe and Fleming’s intimate, alluringly delivered narratives. Our familiarity with such distinct motifs now gets exploited and subverted at every turn. It could be cheap if it wasn’t such a genius move in delivering the full weight of the album’s damning conclusions.

On “A Dog’s Life” (an “aesthetic signpost”, according to the band) there’s a third-act wooziness that builds on a similar dynamic to “Daughters” and also resonates in the Fleming-led “New Life”. Thorpe takes lead on the record’s conclusion, with “Palace” weaving a tender, yearning end that never flinches or breaks the flow of what’s come before. It’s a song of textures and cohesion, finally bringing voice, words and music together in near unity. The songs’s individual components – strong in their own right – intensify in the overall cohesion, as with the whole album. There’s rarely a moment where the unity or disparity between them feels anything but considered, crafted and successfully played out: Present Tense is a triumph of ideas that results in a ground zero for Wild Beasts. They’ve pulled off possibly the most intelligent, involving and profound record since OK Computer.