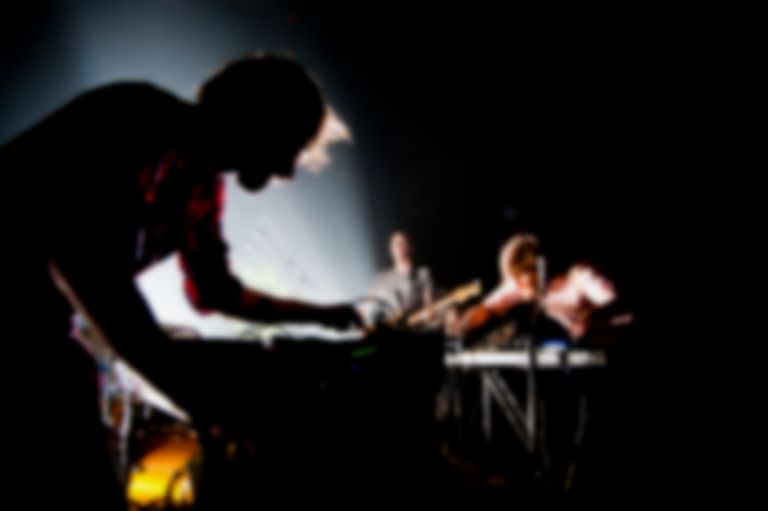 When attending a Holy Fuck show, it's best to expect the unexpected.

Canada's Holy Fuck were formed from the idea of creating a fusion of punk rock and dance music using only analogue instruments, and when they took the stage at London's historic Jazz Cafe tonight (9 August), true to form, there wasn't a laptop in sight.

The band have been touring in support of their recent Bird Brains EP, and also to remind us all of last year's Congrats, the band's fourth album which still stands as a benchmark in propulsive, leftfield electro.

Opening with "Chimes Broken" the whirring of crackling Casio keyboards flooded the space as the combo of fuzzed up bass and diamond splinter drums, both of which serve as Holy Fuck's rhythmic backbone, provided the foundation for the crowd to head-bob gleefully to the beats.

As they strode headlong into the pounding "Tom Tom", Holy Fuck stood amidst a tangle of wires, effects pedals and cracked keyboards, a set up that looked like a Fisher Price NASA launching station, and produced a tidal wave of melodic glitches into a storming set. The latent funk of "Neon Dad" saw the band initiate a slow build that exploded into a fully fledged krautrock tinged wig-out in the form of "House of Glass".

After returning to the stage for the inevitable encore, frontman Brian Borcherdt announced that work had begun on a new album, after which Holy Fuck provided a slinky, bass driven piece of new material, before capping off the night with a blistering rendition of perennial live favourite "Lovely Allen".

As the night came to a close and the crowed shuffled out of the venue, it was clear Holy Fuck had provided the genre shaking dance party everyone had wanted. Who needs laptops after all?