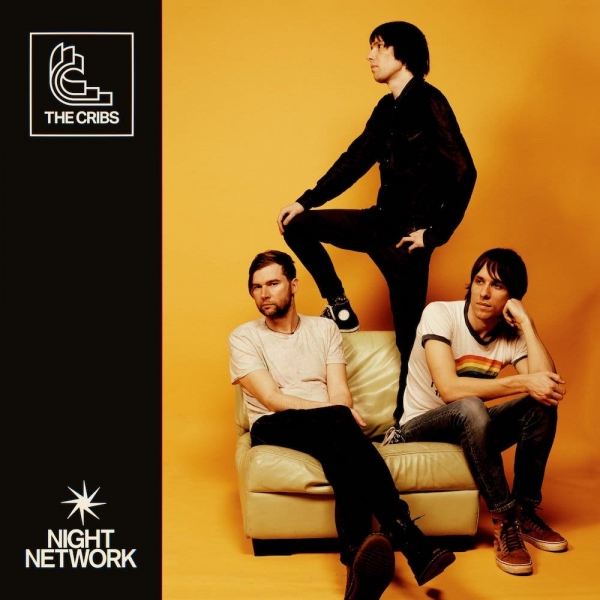 You may not believe it (or want to believe it), but the self-titled debut album by Wakefield legends The Cribs was released fifteen years ago, and this new record – Night Network – is their eighth studio album. Time flies when you’re having fun.

Their last album, 24-7 Rock Star Shit, was their fourth consecutive UK top 10 album – but it was almost their last. Apparently the boys – Gary, Ryan and Ross Jarman – nearly gave it all up, having had enough of the legal and business wranglings of being in the band. However, after The Cribs supported the Foo Fighters at the Etihad Stadium in 2018, a heartfelt discussion with Dave Grohl resulted in the band being offered studio time at the band’s LA studio whenever they liked – an offer the brothers eventually took up in 2019, after reuniting at the Jarman family home for Christmas 2018.

Thankfully, Dave Grohl’s generosity has led to the boys making some of their strongest material in over a decade. The album, which is self-produced, was engineered by James Brown (Foo Fighters, Arctic Monkeys) and mixed by John O'Mahony (who also worked on Men's Needs, Women's Needs, Whatever and For All My Sisters). Also returning for another bite of the cherry is Sonic Youth’s Lee Ranaldo, who lends his signature squall to the excellent “I Don’t Know Who I Am”.

All of this isn’t to say that the band aren’t trying new things: The record opens with “Goodbye”, where the band conjure a ghostly surf sound that has hints of The Beach Boys but more closely resembles the pitch-black beauty of The Raveonettes. Another track that explores some fresher textures is the sugar-rush teenybopper rock of “Running Into You”, and another is the sci-fi madness of “In The Neon Night”, which sounds like a funhouse-mirror take on mid-90s Blur.

“She’s My Style” and “Screaming in Suburbia” return us to more comfortable ground, with fuzzy riffs and pounding drums blasting throughout both tunes. “Siren Sing-Along” is probably the best tune on here, considering that it’s a perfect distillation of everything The Cribs do well – yearning vocals, heartbroken atmospherics, sizzling guitars, and a thunderous rhythm section.

The true beauty of a Cribs album is that it could feasibly be any fan’s favourite, and each of their records has a whole raft of songs that fans can’t wait to hear live - the same is true of Night Network. This is a tight, focused, powerful effort by one of the most underrated bands in the world – and certainly one of the finest bands to come from these shores in the past twenty years.