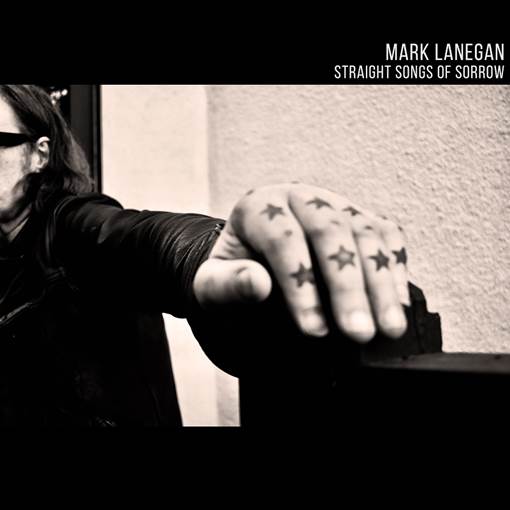 Six albums in ten years is a lot - you’re talking about a Herculean standard of work ethic – and that’s just the solo albums. If you added up EPs, collaborative works, side projects and other extracurricular pursuits, then Mark Lanegan is simply one of the most productive artists (in any medium) in the world.

Even better than quantity, as you must have heard, is quality. Lanegan’s last album, Somebody’s Knocking, was the definitive capstone on his decade. It was his darkest, moodiest, most powerful statement since 2012’s Blues Funeral, but it wasn’t a return to form any more than it was a continuation of quality. In fact, his work had been getting stronger, more refined and more polished: 2017’s Gargoyle was the cleanest, most succinct and consistent statement of his career.

Six months after Somebody’s Knocking, and accompanying Lanegan's new memoir, we have a new record, Straight Songs of Sorrow. Lanegan's solo albums have always contained a unifying thread, be it a theme, a songwriting partner or (in the case of Somebody’s Knocking) a clear-eyed, relentless focus. Unfortunately for us, and for his quality control, Straight Songs of Sorrow has none of those things, and is the first misfire of his solo career.

That’s not to say it’s a total failure, or even a bad album. There are moments of incredible beauty here, and moments of incredible power, but for the first time in Lanegan’s career, they are provided by things other than his voice. Collaborators and contributors do most of the legwork in making Straight Songs work, and they include Led Zeppelin’s Jon Paul Jones, The Dirty Three’s Warren Ellis (Nick Cave’s red right-hand man), Portishead’s Adrian Utley, Lamb of God’s Mark Morton, Greg Dulli, Ed Harcourt, Cold Cave’s Wes Eisold, Crime & the City Solution’s Simon Bonney (Lanegan's favourite singer), Peter Hook’s son Jack Bates, and Lanegan's wife Shelley Brien. The list is, frankly, incredible.

“Ballad of a Dying Rover”, which features Jon Paul Jones, is a lovely, haunted heartsick ballad, and one of the standout tracks here. “Daylight In The Nocturnal House” makes incredible use of Adrian Utley’s talents as a sound artist, as spare mandolin is surrounded on all sides by smoky gasps of dense electronic air.

“Ketamine”, a looming, sinister duet with Wes Eisold, stands as a tribute to the recently departed Genesis Breyer P-Orridge. Another tribute, “Hanging On (For DRC)”, is dedicated to fellow rock ‘n’ roll survivor Dylan Carlson. Neither are especially powerful, but both are pleasingly stark and sincere.

A lot of the other songs are unfailingly bleak and funereal. The final track, “Eden Lost and Found”, featuring Simon Bonney, is unbearably stodgy, and “Churchbells, Ghosts” is simply bizarre. Where the bleak mood works, on tracks like the opener “I Wouldn’t Want to Say”, and the Mark Morton-assisted “Apples From a Tree”, it conjures some of the saturnine pleasures of old. But there just aren’t enough of these moments, sadly.

Not one song, across the fifteen tracks and hour-long running time, reaches anywhere the level of momentum and sheer black intensity of catalogue highlights like “Night Flight to Kabul”, “Hit the City”, “Beehive”, “Emperor" or “Gravedigger’s Song”. As recently as the last record you had “Gazing From the Shore”, “Radio Silence” and “Night Flight…” all moving faster and with more purpose than anything on Straight Songs.

It’s unlikely that Lanegan will ever read anything to do with the album (he doesn’t ‘do’ technology so will definitely miss this), and will continue to produce work at an astonishing rate. But there’s something to be said for slowing down, and being more considerate about who or what is steering the ship. Any one of the contributors to this project would have been more than capable of guiding the album to a higher level of success than the one we find here. Adrian Utley (has anyone called Geoff Barrow?), Warren Ellis, or even Lanegan's regular partner Duke Garwood could have made a success of this collection of songs, and brought with them a unifying sensibility that many people will find lacking. They would also, presumably, have chopped a few of the filler tracks.

It’s a shame – and of course, potentially a premature evaluation – but Straight Songs of Sorrow pales in comparison to Lanegan's previous records, and leaves the unfortunate impression that it would have been the best of his career if only he’d focused on quality over quantity.