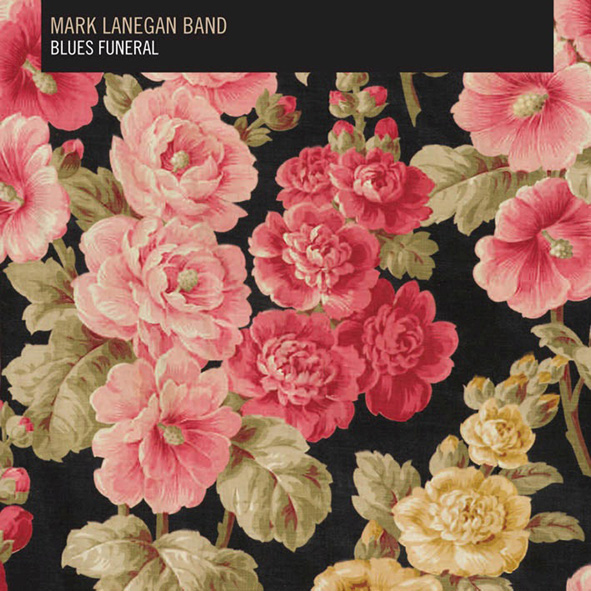 It’s been seven years since Mark Lanegan‘s last solo album, 2004′s much-praised Bubblegum. This time, the extended delay wasn’t caused by the kind of self-destructive pursuits that have derailed Lanegan in the past. Rather, he’s been distracted by his serial duties as a guest vocalist. As well as being an integral part of the extended Queens of the Stone Age posse, Lanegan’s established a reputation as the go-to guy for a drop of authentically grizzled Americana menace on recordings by Country-trekking Isobel Campbell, electronic producer duo Soulsavers, and many, many others.

The hectic work schedule appears to have boosted Lanegan’s creative energies. A near-perfect culmination of ideas evident in past solo outings, Blues Funeral proves Lanegan’s ready to step up from cult acclaim-cultivating chronicler of hard living to the rarefied realm of dark side-dwelling songcraft occupied by the likes of Tom Waits and Nick Cave. Thematically, not that much has changed. Even in the drug-damaged terrain of grunge era Washington State, Lanegan’s substance abuse stood out, and the hard times – difficult upbringing, jail stints, mountains of narcotics – endured by the now clean, LA-based vocalist continue to inform his songwriting. Whilst seemingly unpicking broken human relationships, it doesn’t take much interpretative skill to figure out that likes of ’Gravedigger’s Song’ – powered by an ominous churn akin to a ghost train speeding towards the none-more-black heart of a particularly spooky night – and the haunted ‘Bleeding Muddy Water’ actually address a difficult break-up with Class As.

Although the building materials are largely familiar, the finished constructs are grander than ever before. As strong as Field Songs (2001) and Bubblegum were, their single-mindedly nocturnal pursuit of the essence of drug-addled blues occasionally risked sliding into repetitive, by-the-numbers world-weariness, with weaker tracks seemingly cut on stolen energy in between spells of slumber.

Blues Funeral emits a real spark of enduring inspiration. Lanegan and producer (and fellow QOTSA alumni) Alain Johannes, assisted by such guests as drummer Jack Irons, Josh Homme and Greg Dulli, manage to keep the proceedings sparse but also richly textured and deeply atmospheric. The pace is predominantly stately, but far from sleepy. The contemplative numbers, such as ‘St. Louis Elegy’, moaning and sighing like a theme tune to a Western populated by ghosts, throb with majestic grandeur. The subtly electronic foundations of the excellent ‘Ode to Sad Disco’ and deceptively upbeat ‘Grey Turns Black’ nod towards Neu!, Harmonia and other German past masters of the ‘motorik’ groove, suggesting Lanegan’s buried the obsession with the Blues that’s powered his solo career up until now. The few out-and-out rockers threaten to kick the door off its hinges.

Lanegan’s in brilliant voice throughout, his tobacco-scorched subterranean baritone rumble managing the Tom Waitsian feat of sounding damaged beyond repair whilst remaining a powerful and versatile instrument. In lesser hands, the outbreaks of regret, sorrow and religious imaginary that populate the lyric sheet could well crash-land into unintentional self-parody, but Lanegan packs enough gravitas to make couplets à la “if tears were liquor/I’d have drunk myself sick” sound profound enough for inclusion in the Great Book of Blues Wisdom.