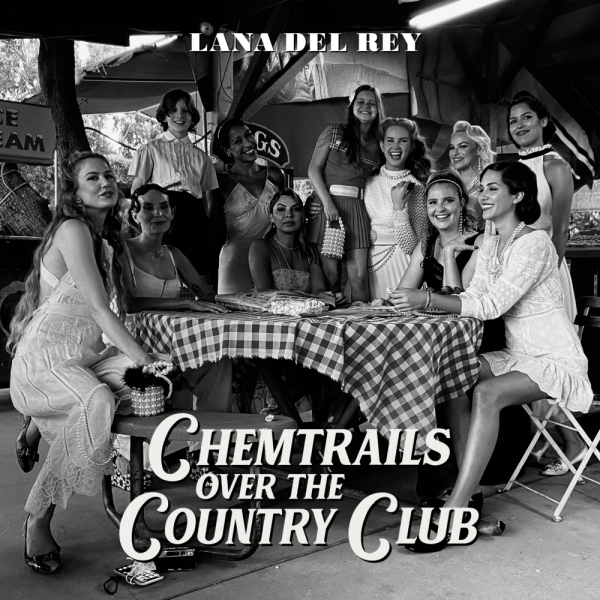 There are few artists as unrelentingly on brand as Lana Del Rey. Ten years ago she arrived in a package of gloriously glamorous Americana - unabashedly reverent of Californian high society - and has stubbornly stuck to it since, despite increasing derision.

Over the years, a spoken word poetry collection and song titles such as “Coachella (Woodstock of my Mind)” have made dutiful appearances. Now, like clockwork, here she is again, posing with a bunch of pals for an album entitled Chemtrails Over the Country Club.

And yet, Del Rey strikes as an artist reinvigorated. Two albums ago she seemed to be merely drifting through motions of sultry crooning and cocktail lounge covers. She was an artist stuck in a suffocating niche: trading in nostalgia, but still every bit a pop star. Confused albums filled with Phil Spector production and chart-chasing Playboy Carti features were the result.

Attempting to redefine herself, 2019’s Norman Fucking Rockwell saw Del Rey collaborate with Jack Antonoff and the pair committing to an altered direction; focussing on a folk-rock sound and delivering ballads which showcased the poignancy of her songwriting, irrespective of their chances of becoming hits. Chemtrails leans further into the sounds of sunny, ‘70s California - summoning Judee Sill and Karen Dalton - and it’s watertight too: her first 45 minute album since her debut.

Sonically, things sound gorgeous. “Wild At Heart” ends with a chorus of positively ecstatic vocals, while “Dance Till We Die” even boasts a Cat Stevens-horn section. “White Dress” sees Del Rey taking vocal risks she strayed clear of before, with a squeaky chorus which will grate on as many as it seduces. “Not all Those Who Wander Are Lost” is luscious, specked with delicate and trembling strings and a double-tracked chorus once again evoking the rippling pools she’s sung about since Born to Die.

The album’s ingenious title also hints at a new approach to her favourite subjects. In recent years, middle-class indulgence in theories like QAnon have shone a harsh light on the old-world mentality still simmering beneath the affluent suburban living - the one still held as the paragon of the American Dream. Del Rey, it transpires, is the perfect vessel to explore the bitter underbelly of sequined dresses and white fences.

On “White Dress” she sings with a throaty whisper - perhaps autobiographically - from the perspective of a young waitress attending “the men in music business conference”. It’s a hint at the uncomfortable power dynamic lurking beneath the industry Del Rey has had to navigate: “I was only nineteen / it was a scene”. Alternatively, “Yosemite” is a love song, but the kind that only an assured privilege can afford: “I did it for you, you did it for me / we did it for the right reasons”. It distills the worldview of the people who populate Chemtrails club - those who believe they are uniquely owed the world.

Del Rey’s music deals in the private tragedies of these glamorous elites and, in the time of a pandemic, it’s a bizarre irony that such stories still fascinate us so. Why do we care about the troubles of the rich and famous? Why do we pour over the sadness of Harry and Meghan, and Lana Del Rey, rather than those less fortunate? The answer lies in what society values most. These stories grab us because they contradict the very myths our lives are built around. These people are quite literally rich and famous - they have acquired everything we are told is our goal - and yet they’re unhappy.

This is the thesis of the album’s fragile and devastating final song, a cover of Joni Mitchell's “For Free” - yet on songs like “California” Mitchell presented herself as a seeker of freedom. Del Rey has it the opposite way. Here she is trapped, enviously eyeing a street performer who supposedly has none of what she does. She sings that “Me, I’ll play if you got the money / or if you're a friend to me / but the one-man-band / by the quick lunch stand / he's been playing real good for free”.

Moments like these are what keep Del Rey’s preoccupations with glamour and high society poignant rather than gross. Yes, she is in The Club, but she’s not seeking a way to remain, she’s seeking a way out.