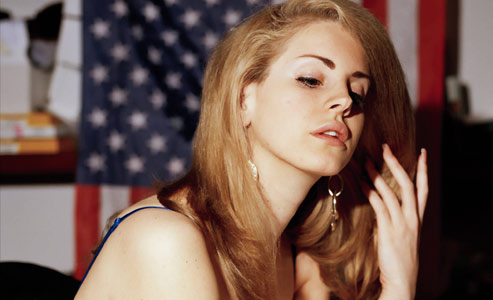 Last week, Popjustice editor Peter Robinson wrote what he considers to be The Final Word on Lana Del Rey.

The thrust of his argument, such as it was, suggested that “alternative music scribes” are “having trouble with Lana” because they are imposing “boring ideas of authenticity onto a pop creation." Plus, of course, that writers are desperately trying to predict how many records she will sell, so that they can craft their viewpoints accordingly.

It’s easy to imagine the wry little smile as he hammered out his final flourish: “You cannot be trusted with a popstar. You’ve had your chance. Hand her over.” It was cute: both delightfully pompous and totally inaccurate.

Robinson’s open letter was a perfect illustration of the tendency amongst some writers to suggest that all criticism of Del Rey can be reduced to either plastic surgery-fixated moronism or vague, apparently outmoded concerns about authenticity. It’s fascinating and frustrating in equal measure: fascinating because of the degree of vitriol on both sides, and frustrating because Born To Die actually deserves a proper, critical response.

There are some very, very good songs on this record. I will be surprised if, for example, there are a dozen tracks better than ‘Off To The Races’ released this year. It is everything that Born To Die nearly promised to be; a Danny Elfman-esque noir that reads like a mobster wife’s pocket diary, flitting between a “Las Vegas past” and Rikers Island like a bastard Holly Golightly, or a distorted Blanche DuBois. Meanwhile ‘Radio’ is an opiated flutter through the morphine daze of newfound celebrity, all languorously enunciated vowel sounds and the best lyric of the record: “Now my life is sweet like cinnamon / Like the fuckin’ dream I’m living in.”

The tunes are there – and yet this record remains a distinctly uncomfortable listen.

Lyrically, Born To Die oscillates between vacuous wealth-worship and acutely problematic submission narratives. The male gaze dominates; in ‘Off To The Races’, for example, Del Rey watches her “old man” watch her in the swimming pool while he sits “sipping on black Cristal”. Meanwhile ‘National Anthem’ reads like a guide to repulsive consumption, with Del Rey intoning nonsense like, “I’m your National Anthem/God you’re so handsome/Take me to the Hamptons/Bugatti Veyron.”

It’s telling that Born To Die’s notion of success relies on such unimaginative signifiers. Del Rey conjures a world of professional leisure in which she attaches herself to a series of James Dean-esque men, all of whom are inevitably “no good for me”. She is cast as the doomed seductress, watching herself collapse into a series of relationships characterised by capitulation, in which she is expected to change herself, or play a part, to suit his preferences. She documents her dysfunction, and that of her boyfriends, but apparently lacks the ability to do anything about it. She is defined by her relationship to men.

In this respect, Born To Die perhaps makes more sense when considered next to Take Care or My Beautiful Dark Twisted Fantasy. There are stylistic similarities: all three records use the expansive but oddly flat-sounding production that has become so prevalent in hip-hop over the last couple of years. More importantly, though, they all centre on a protagonist who is brutally self-interrogatory, and yet apparently convinced that their problems are immutable. But while Drake and Kanye’s efforts seem confessional, there remains an impassable emotional distance between Lana and the listener. There is a sense that everything is happening behind glass; that there is a membrane through which the occasional great chorus travels, but behind which the humanity seems stuck. Del Rey is constantly offering herself up to someone, knowingly prostrating herself at the altar of a man or of money – and yet she seemingly offers us very little of herself. Instead, everything is couched in layers of irony, peppered with diversionary tactics like odd accents or the faux-turntablist vocal bric-a-brac in ‘Blue Jeans’ or ‘Summertime Sadness’.

This distance, this refusal to commit, is both the most interesting and the most infuriating thing about Born To Die. The lack of conviction feels oddly contemporary: a nice mirror for a generation that is, in many ways, still trying to emulate the recent past, and finding it impossible. Del Rey has attempted to craft personas that combine the hallmarks of both the hyper-sexualised pop stars of the mid 2000s and the ballsy opulence of the Jazz Age – but her manifestations are subdued, less bombastic. There is a sense of a descending pall from which she is trying to emerge; a fug defined by archetypical notions of womanhood, and in which she is fumbling to find a character that fits.

The problem with Born To Die is not, as Peter Robinson suggests, that people don’t understand Del Rey is playing a character, or that there has been some sudden, mass misunderstanding of the notion of “authenticity”. Rather, the issue is that she inhabits each character so unconvincingly that it becomes impossible to truly care about any of them. Combine this with a series of stories that slavishly reinforce the notion that a woman’s role is one of seduction, submission, or pliability, and you end up with a sour taste indeed.