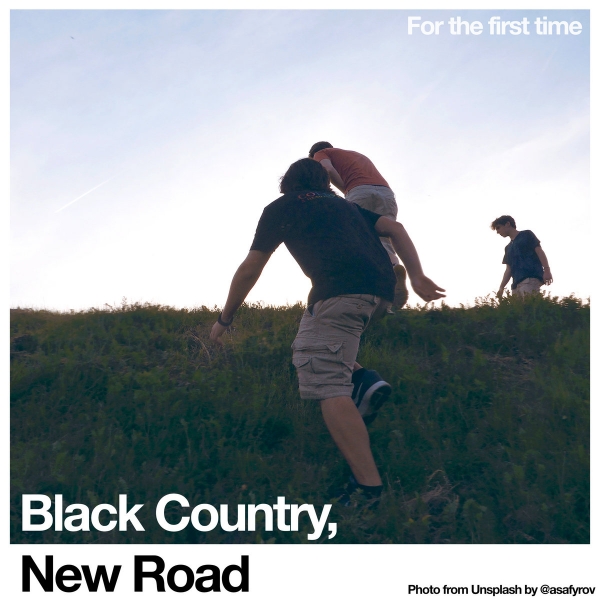 ​​Masters of the slow build. Purveyors of intensity. Inhabitants of modernity. Everything deliberate. Everything laced in satire and the driest wit. Black Country, New Road emerged with debut single “Athen’s, France” in 2019 as Speedy Wunderground’s freshest faced South Londoners. A wry, snarling post-punk number, it was soon followed by “Sunglasses” - a seething, modern jazz epic delivered in two sharp parts.

Now comes the time for their debut album For The First Time (on which both aforementioned songs are present in a new form) where we continue to find the band’s sharpness played out not only in Wood’s lyrical prowess but in every instrumental twist. Every move somehow cutting to the heart of things. Even the 5:28 instrumental track that kicks off the album is simply called “Instrumental” - an overwhelming brew with horns that sound as if they’ve risen from the depths to swallow you whole. This is just the beginning.

So much of the band’s identity is wrapped up in half spoken, half sung words that this rumbling drum solo led number feels like a statement. A moment to take in the cacophonous wonder of saxophonist Lewis Evans, keyboardist May Kershaw, drummer Charlie Wayne, guitarist Luke Mark, guitarist/vocalist Isaac Wood, bassist Tyler Hyde and violinist Georgia Ellery without the distraction of delishly acerbic modern observations every minute or so. Don’t get us wrong though, we’re all here for it.

A winding bassline soon drops in and we find ourselves in the familiar yet unfamiliar territory of “Athen's, France” - re-recorded to fit tonally with the rest of the album and to reflect how the song had grown after a year of heavy touring. Lyrically Wood turns the focus inwards, removing explicit sexual references and replacing them with lines like “Oh I am very young but I am working, working on the glow up.”

Sonically it’s looser yet more cohesive with a warmer, more harmonious outro that delivers us seamlessly into the first single to be taken from the new record, “Science Fair.” A track in which squalling guitars interrupt sprawling viola and sax loops, each vying for your attention while cymbals jitter in the background, providing a platform for Wood. An unassuming song at first “Science Fair” soon descends into madness, (as Black Country, New Road songs so often do) as Wood delivers his narrative with unrivalled speedy, tenacity, anger and eloquence - screaming “It’s Black Country out there” as the whole thing collapses in on itself in a wild frenzy.

A frenzy that then leans into the new growling distorted guitar intro to “Sunglasses”, which too has been revamped to fit the flow of For The First Time. “We wanted it to sound exactly how we love to sound live,” Evans said when speaking about their choices to re-record. It’s eruptive, beautiful, self aware, visceral and all the things we know that song to be but it also finds a more melodic core, with Wood embracing his singing voice and harmonising with the band. It lends greater grace to their satire whilst losing none of the bitterness - pointed squarely at the distance between what our generation was promised and reality.

Latest single “Track X” continues the focus on Wood’s singing voice as the band present their most vulnerable face. Gentle saxophone notes play with tense violin strings while a deep baritone voice slowly dances over the top of a warm array of textures with heartfelt, earnest sentiments - still peppered with amusing nods to modern pop culture (throughout the record we get stans, influencers, Tik Tok glow ups, Phoebe Bridgers and contemporaries Black Midi to name a few).

Just like “Instrumental” came in at the beginning, the aptly named 8 minute “Opus” marks the end. It’s the most outright jazz inspired track on the record, the first half mostly leaving behind the prowling bassline of post punk in favour of frenzied sax howls that demand movement before the slow crawl and fuzz returns. Repetition in this song, like in the whole record, is the key to Black Country, New Road’s power - Wood howling in increasingly apocalyptic broken vocals: “Everybody’s coming up, I guess I’m a little bit late to the party.”

With only six tracks spread out across 41 minutes, For The First Time is a tornado of a record. Conjuring all the sights, sounds and moods of endlessly intimate and universal experiences, it pulls you up with rallying cries and drags you down with spiralling jazz freakouts. For The First Time is ferocious and endlessly intelligent, highly considered and wildly improvised, eked out with bristling tension and set alight with a burning intensity and a knowing smile.