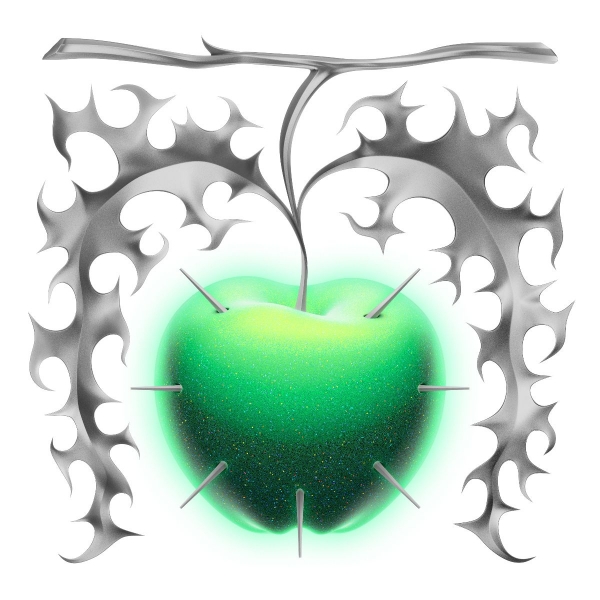 If last month’s encyclopaedic collection 7G was a “gateway into the Mad Hatter’s mind”, then Apple is the pruned fruits of PC Music founder A. G. Cook’s labour.

It’s only been just over a month since the surprise release of Cook’s expansive collection 7G. After a sabbatical from releasing eponymous projects in favour of sprinkling gold dust on albums by both new gen PC Music alumni such as Namasenda and Planet 1999 and alt-pop pals - including on Charli XCX’s Mercury Prize-nominated lockdown album How I’m Feeling Now. Cook’s refocusing closer to home will sate the thirst of those who have watched the movement spurred by his now-iconic label PC Music very closely since they first appeared in 2013. The time since has seen that “PC Music sound” gain momentum and seep into the mainstream thanks to Charli, SOPHIE, Hannah Diamond and more recently 100 Gecs, but in his generosity of elevating other artists with his skills, Cook has run the risk of compromising his own traction.

As 7G was apt at proving, just because Cook has been a kind of quiet does not mean that he has not been busy; the 49 tracks of the encyclopaedic collection was a scrapbook of experimentation, never mind wildly ambitious for something pertained as his official debut album. In duration, Apple is barely a whisper in the breeze by comparison at ten tracks long, and in the way that 7G meticulously unpicked Cook’s innards so fans could see the master’s mind at work, Apple weighs out the specifics and pours them into the meting pot.

Tracks such as “Airhead” shimmer as they playfully dance through bright ripples and crunchy beats, whilst the similarly fun rhythm and pop melody of “The Darkness” meanders into a sweet and chilled refrain. “Lifeline”, on the other hand, embraces the grand percussion of big '80s power ballads, but opts for an icy melancholia as opposed to big, fist-bumping wails. The indulgent addition of guitar again shows Cook’s surprising affinity with the instrument, the murky reverb of “Beautiful Superstar” adding a dash of rock to its pulsing underbelly.

Lead single and album opener “Oh Yeah” once again plays into Cook’s unabashed love and influence of Smashing Pumpkins with its contemplative melody and Corgan-esque inflections that, somehow, still manage to permeate the auto-tune; cohesive and succinct, the warm synth and trickle of brass make for a number as radio-friendly as Cook has ever been. By comparison, the recently released “Xxoplex” unleashes Cook’s experimental alter-ego as he takes listeners on a whistle-stop journey through eras of electronic music; from stomping beats and abrasive whirrs of supersaw to its '90s trance synths and mid-'00s, Crazy Frog-reminiscent polyphonic aggravations.

That very ethos is reflected in Cook choosing to name this collection “Apple”, describing the word as “one of the simplest, most everyday objects, which somehow contains references to almost everything imaginable - from computers to The Beatles, New York to Snow White, and an entire world of history and mythology”. Adding his own interpretation to its canon is fitting for an artist so ready to push boundaries.