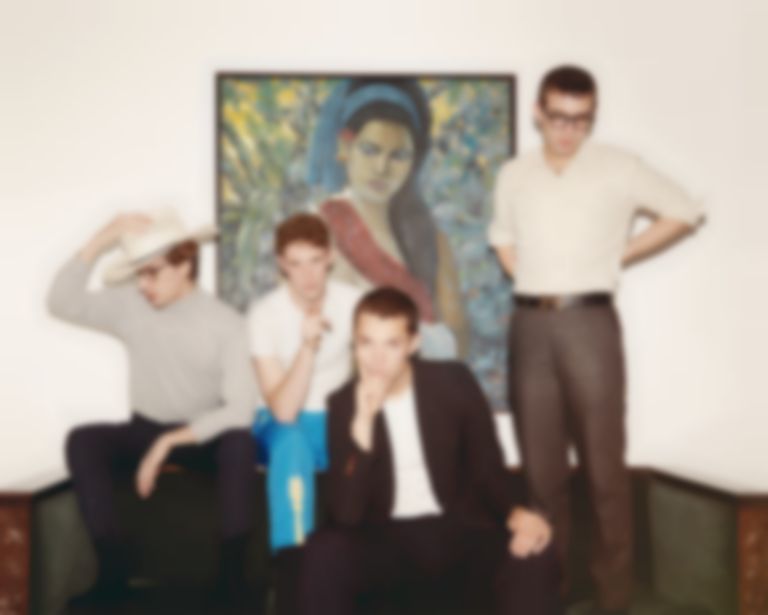 Spector have unveiled rapid-fire synthpop cut "Fine Not Fine", another taste of upcoming EP The Ex-Directory.

"Fine Not Fine" links up with "Untitled In D" to preview the band's new short-player, which is finally coming out this week (after being pushed back from January).

"'Fine Not Fine' came from a session where I panicked I wasn’t writing enough songs so tried to finish 10 in a week," explains frontman Fred Macpherson. "I think I only got to two but they both ended up on this EP. This one was a stream of consciousness inspired by the more self loathing corners of sad Twitter - looking at the state of your life a third of the way through and realising it’s just a veneer or an unconvincing brave face. A Spector listener (I don’t really feel comfortable with the word fan) once told me our lyrics were good because every line could be an Instagram caption. In which case they’re going to love this one. It’s also our fastest song to date for some reason - faster than 'Chevy Thunder' which was 180bpm. Too fast if anything."

The new EP follows up 2015 record Moth Boys, though the group have shared a few pieces of new music in the time since that was released - including pro-EU anthem "Born In The EU" and standalones "Decade Of Decay" and "Tenner".

Spector are playing a handful of UK shows this spring, including a date at London's Scala on 24 May. Find out the full details.

The Ex-Directory EP is out 9 March via Moth Noise.