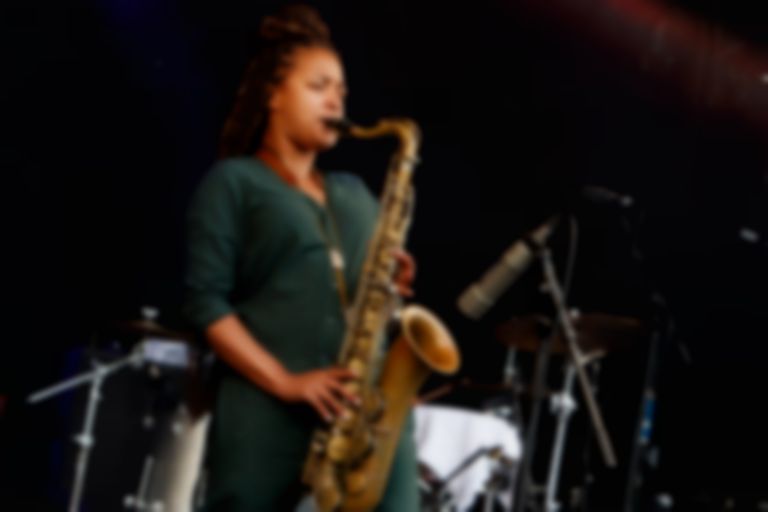 After performing on the Woods Stage at End Of The Road 2019, saxophonist and composer Nubya Garcia revealed that she features on a new podcast with Kojey Radical and others.

Garcia kicked off her set at the Woods Stage in the mid-afternoon rain shower, but soon after kicking off her jazz set, the sun decided to make another appearance.

Catching up with Best Fit after the show, Garcia said of the performance, "The set was wicked. At the beginning I was a bit sad because it was raining a lot, and no one was there, and then the second we started playing - people arrived a bit before and I saw two guys in chairs with a big umbrella, I was like "you are the greatest" - and then the sun just came out and it stopped raining and I was like "oh my god this is so amazing". We had a wicked, wicked time, it felt really nice and was a really beautiful crowd."

Back in May, Garcia was one of 18 artists to feature on a Jean-Michael Basquiat compilation. "It was a wicked one. I really really enjoyed that, and it’s such a great selection of people really. It was set up by my friends and it was a huge project," Garcia explained. "When you’re one part of seven tracks you kinda forget how big it is and then it comes together and you’re like “wow”. I’m really happy to be a part of it, and I got to make a track with two phenomenal musicians, an absolute hero of mine, Male, so yeah that was special."

Moving onto the topic of dream collaborations, Garcia added, "I’ve got big dreams of collaborations but it doesn’t mean they’re ever gonna happen. I grew up listening to jazz legends as well as soul legends like D’Angelo and Erykah Badu. Doing a track with Male, I would never have imagined that would ever be a possibility, but yeah I’m just gonna hope that more things continue to happen rather than putting too much pressure on it."

After mentioning Kojey Radical when speaking about the Jean-Michael Basquiat compilation, Garcia revealed she's recently worked on a new podcast with him, "We just did a podcast together. It’s coming out in October, it’s wicked. It was a really, really interesting chat with Shabaka and Ashley Henry and Kojey [Radical], and yeah he’s dope and such an incredible thinker. He’s got an amazing thought process/creative process and general embodiment of emotions."