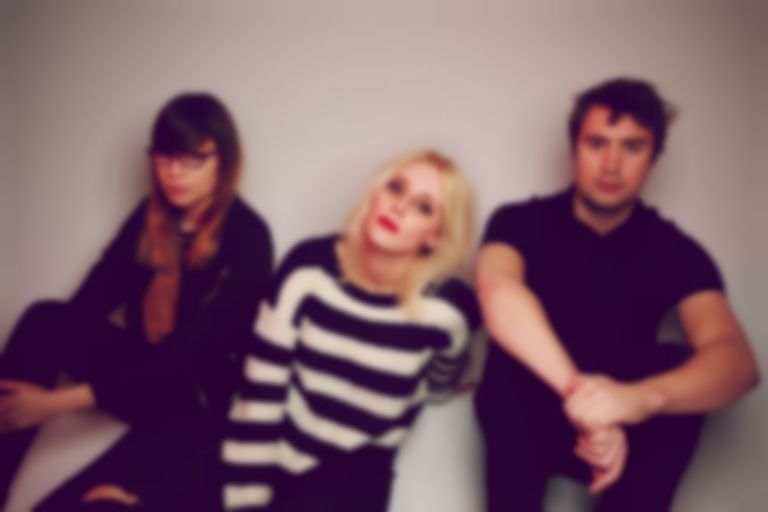 Following on from 2014's Deep Fantasy Mish Barber-Way and co (guitarist Kenneth William and drummer Anne-Marie Vassiliou, with Deap Vally's Lindsey Troy helping out on bass) have pushed their sound and song writing to new heights. The singles "Kiss Me When I Bleed" and "Below" have hinted at how great Paradise might be, and the rest of the album follows suit. There are few better lyricists operating today who can better Barber-Way, and the huge production on the album should propel White Lung to great things.

Ahead of the release, we spoke to Barber-Way and William about what inspired the creation of Paradise.

Hi Mish, this record has been described as the band’s "cleanest" and containing your best song writing so far – would you agree with that, and why do you think that is?

Barber-Way: "Production played a big role in this. It’s clean and bright. There is a lot going on. You can’t mix our albums into fuzz. We are good at what we do. You clean up other bands that relied on distortion to hide their shitty playing and they come up red faced."

Since we spoke (a lot about Nazis) in 2014, you’ve got married and I’d presume you’re happy. So you’re maybe in a position where you don’t have the personal, errr, "anguish" to propel your song writing…did you find it difficult to come up with material for the album?

"I did for a minute, then I realized how much freedom there is in writing from fictitious characters and other people, and that got me excited to write. Lyrics are my strong point."

I do think to some extent it is a less personal record than Deep Fantasy and there are times when it feels like you’re writing in character – is that the case and did you find that an easy thing to do?

"I wanted to leave less interpretation up to the listener by creating vivid images that could not be misunderstood. “I will give birth in a trailer / Huffing the gas in the air / Baby is born in molasses / Like I would even care”. That is what it is. There’s no confusing the image in your head. A bathtub full of molasses as a baby pushes out the birth canal? I love that picture. By singing from people other than myself, I had complete freedom to say these things that aren’t a part of my own life. Being autobiographical felt so fucking boring and limiting. I just had to go elsewhere."

You’ve said that “Below” is a song or a ballad about glamorous women; with that quote from Camille Paglia as inspiration it often feels – especially in the internet age when people are there to be shot at the moment a picture is posted – like it’s not easy for a woman to be beautiful or celebrate their beauty and still be regarded as a feminist by some people. Is that the crux of the song, that it’s alright to be both?

“'Below' is my Stevie-Nicks-meets-Celine Dion ballad. I needed to try to do a ballad about glamorous women. It’s based on a quote by Camille Paglia from an interview she did a few years ago in Toronto. 'Beauty fades. Beauty is transient. That is why we value it,' she said. 'Feminism’s failure to acknowledge that beauty is a value in itself, that even if a woman manages to achieve it for a particular moment, she has contributed something to the culture.' It’s a song about the preservation of glamour and beauty. I wanted to honor the Hollywood beauties who certain feminists have written off as nothing but, and realize how much they contributed to femininity and art. The scrutiny of the beautiful woman, especially from other women, is gross and death is when she can finally be free. I imagine all these women preserved forever like a shining crystal caracas."

With that song and “Kiss Me When I Bleed” it’s clear that you’ve not lost the fuck-you, positive attitude to your music…what continues to keep the anger burning?

"As the Jim Goad once said, 'I am offended by nothing, but annoyed by everyone.' That pretty much sums up how I feel in better words than I could say myself.

Did you have any inspirations when writing and recording the album….either musically or from what was going on around you?

"I write for a living, so I’m always reading and researching. I did studies about bestiality, gender politics of pedophiles, female murders who help their spouses rape and torture, biology, motherhood. I picked the brains of sex therapists, psychologists, white supremacists, cosmetic surgeons (the most interesting doctors to interview) and gynecologists. I was all over the place. This work all informs my lyrics, obviously. It’s what I am thinking about. I was also only listening to country and blues music while we made this album. I can’t listen to rock when we are writing rock music. The straight-forward, story-telling of country and blues is really appealing to me. I ripped off that tradition in my own way on this album.

You’re a Canadian so you must look at the US Elections and despair, especially when your native country has someone – and of course he has his flaws and critics like any politician – like Justin Trudeau. What’s your view on Clinton v Sanders v Cruz v Trump?

"Like Melina Trump, I prefer to keep my political views to myself."

Kenneth William sounds incredible on this record, what’s your relationship like as song writers?

Kenny William: "We both trust each other, so we work separately when we’re writing or in the studio.  We’ve been living in different cities for years now so it made sense to keep that dynamic when we were recording.  A lot of the instrumentals were completely written and recorded before she even heard them this time.  So we both had more space to work and I was able to mess around with pedals and overdubs and make something more creative out of my guitar parts then I had the opportunity to in the past."

There’s a lot of talk about punk and accessibility and production around this record, and it almost feels like people are readying a backlash against a “punk” band wanting to sound big, modern and not paying deference to the past or what White Lung should sound like for some people – is that something which you don’t care about, or bothers you? Like, other bands such as Perfect Pussy or Waxahatchee or Mitski….it now seems okay to be ambitious, and retain that certain spirit, like the scene isn’t going to see it as a betrayal?

William: "I totally understand why people hate underground bands trying to break into the mainstream by recording some desperate overproduced album that sounds like it could be played on the radio but is really a piece of trash but our record isn’t trash it’s good so I feel like this doesn’t apply to us."

Barber-Way: "Punk is the only genre that does this. Punks are like working class Brits. You are seen as a trader if you make a little more money, landing yourself and your family with a better quality of life and a new tax bracket."

What are the band’s plans for 2016... are you going to continue to write your columns in various magazines?

"Yes, of course. And some new, interesting things coming up the pipe line that I can’t jinx just yet."

White Lung's Paradise is out Friday 6 May via Domino.