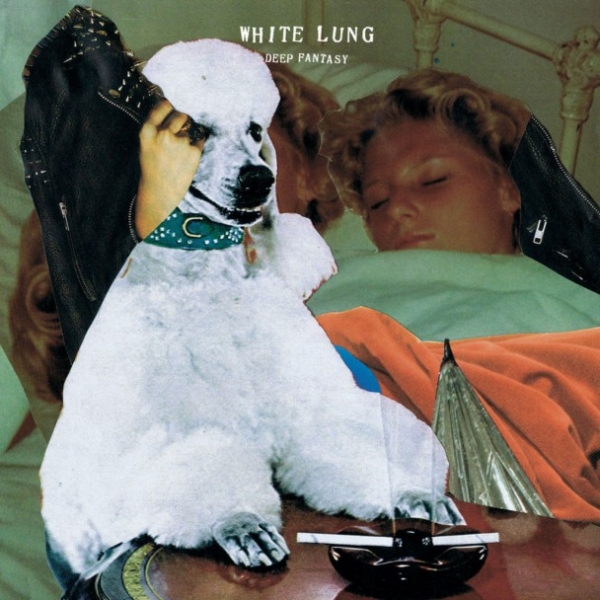 The moment that Canadian foursome White Lung announced their arrival (and I mean really announced their arrival) was their second album Sorry. Nineteen minutes long and stripped of all unnecessary parts, it made a star out of singer Mish Way; her full-throated voice was confrontationally punk-as-fuck as much as it was dripping with melody, and her way with a lyric (Way also writes brilliantly for a number of publications) made that album a gripping listen.

Despite its brevity, Sorry paved the way for the White Lung we find roaring out of the blocks on Deep Fantasy, their third album and first for Domino Records. So, being on a bigger label must mean a dilution of the band’s sound, right? Well – thankfully – no. Deep Fantasy is a wonderful and honest look by Way at her life and all she surveys around her at this moment in time, lyrically and musically as unflinching as White Lung has always been, but tackling bigger and bigger issues – if anything, signing to Domino has freed up Way to be even more punk than ever.

On Sorry, Way addressed addiction and drugs through songs about a friend of hers but here she comes roaring out of the blocks with “Drown with the Monster”, singing directly about her own alcohol and drug issues. Having spoken to Way on this subject, it’s the two sides of her that comes out in this and other songs; here she’s battling against the Way who wants to party and be irresponsible, and that battle is reflected in the sound of the song. Her clear and powerful delivery contrasts beautifully against Kenneth William’s agitated bursts of guitar squall and the subtlety-free battering ram drumming of Anne-Marie Vassiliou (what a drummer she is too). It works for the lyrics and music too, as the different personalities come to the fore. William hides his chords under feedback and anxious, scratchy moments, while Way’s lyrics, always with an undefined “YOU” being addressed, stand square up to you and look you in the eye.

Although there’s “issues” being taken on here, like addiction, there’s no real sign of negativity. On “Snake Jaw” where Way is addressing body dysmorphia (her own body issues and the general pressure felt by women to be what’s thought of as thinner or prettier or whatever) she again divides herself, railing against those pressures and delivering a fuck-you to those who try and make women feel bad about themselves but also giving herself a shake for caring so much about what people think. Alongside the bright and driving power chords, Way yells positive messages, urging the listener to join her in waging war on the image-obsessed. Here, White Lung sound like a rock and roll band, or perhaps post-hardcore DC style as the rough edges are never quite polished off - nor should they - and you can see what Way means when she says that Deep Fantasy is the band’s rock record.

Way’s internal battle raises its head again on the pummeling Hole/L7-esque “Face Down” where she alternately sings “I sink to the belly of the weak again” before delivering a kiss-off to those who shout the loudest but have fuck-all important to say with “the dumb won’t make a sound / when you want them”; on one hand you might think this is a sign of a conflicted individual but Way is equally as confrontational with herself as those who might dare to cross her.

This is twenty seven minutes of searing punk rock, blistering guitars, brilliant singing, incredible drumming and there’s never a dull moment or weak point. I love everything about White Lung; from Mish Way’s star quality and huge personality (and for being just the best interviewee) to the music that accompanies her and her impeccable lyrics. Punk as fuck.