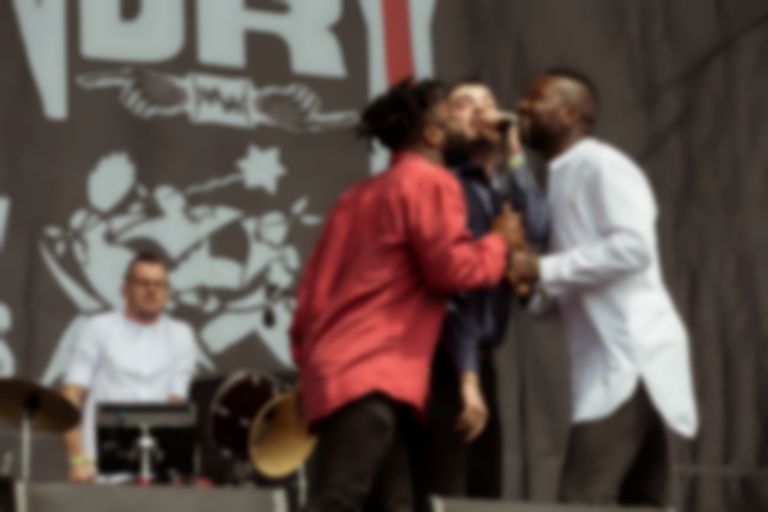 Scottish hip hop trio Young Fathers have been dropped from Germany's Ruhrtrienalle Festival after conflict of views on the Boycott, Divestment, and Sanctions movement.

The Mercury Prize award winners have been dropped from the Ruhrtrienalle Festival lineup after conflicting with organisers over their support for the Boycott, Divestment, and Sanctions movement, which lobbies for decisive action against Israel to protest its human rights violations against Palestinians.

In a statement issued on the festival website, it explains, "Regrettably, the Young Fathers have not distanced themselves from BDS. We explicitly do not conclude from this that the band is anti-Semitic, and, in this context, I consider it important to emphasise that criticism of the policy of the current Israeli government is not per se equivalent to anti-Semitism. However, the Ruhrtriennale distances itself in all forms from the BDS movement and wishes to have absolutely no connection with the campaign. We have therefore decided to cancel the concert. We regret this immensely, because the Young Fathers would have set an important tone in the programme of the Ruhrtriennale.”

Young Fathers asked Artists for Palestine UK to issue their response statement, that explains, "We feel it is a wrong and deeply unfair decision by the festival to take this stance and to also ask us to distance ourselves from our human rights principles in order for the appearance to go ahead."

"Anyone who knows the band and our history will know we oppose all forms of hatred and racial discrimination. Always have. And we, like BDS, ‘do not tolerate any act or discourse which adopts or promotes, among others, anti-Black racism, anti-Arab racism, Islamophobia, anti-Semitism, sexism, xenophobia, or homophobia.’

"We support one of the only peaceful protests a person can take, in the hope to achieve a just and comprehensive peace that allows Palestinian refugees the right to return to a safe homeland, and that allows Israelis and Palestinians of all faiths (and none) to live together in peace. With love, Young Fathers."

Musician Brian Eno, Thurston Moore and more have revealed their support for the hip hop group on social media.

Musician Brian Eno on standing up and speaking out #SupportYoungFathers pic.twitter.com/TzL5nssq96

Being removed from Ruhrtrienalle Festival's lineup isn't the first, Young Fathers experienced something similar at Berlin's Pop-Kultur festival in 2017 due to its links with the Israeli embassy, leading to other artists withdrawing from the festival.