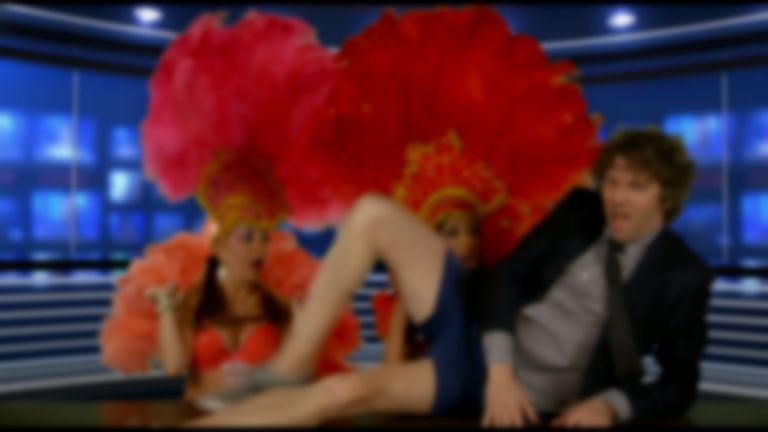 !!! (Chk Chk Chk) have shared their ridiculous new video for "Every Little Bit Counts" from latest LP As If.

The video, which debuted on Funny Or Die, is directed by Casper Kelly, the creator of Adult Swim’s "Too Many Cooks" video (and the director of the band's "Ooo" clip).

Kelly says of the new video:

"'Every Little Bit Counts' excited me because it is such a fun, fun song and tonally different from the weirder, darker stuff I usually do. The basic idea is there's a stuffy world, in this case the news, and Nic comes in like Willie Wonka or the Cat in the Hat and has a bit of fun with it. Crazily and coincidentally, while shooting on the set Nic told me he once did a thing like this in real life - he was walking somewhere and there was a news crew interviewing a man opposed to gay marriage, and Nic popped in and said something in the mic. If someone by chance taped that newscast he'd love a copy.

"Nic was wonderful to work with. He somehow combined Zen calm with boyish enthusiasm and was up for anything.”

!!! are also headed to the UK next month for a tour, which'll feature Stereolad as support. Stereolad is !!! covering Stereolab songs. Frontman Nic Offer explains:

“Why? Just for a kicks, for a laugh, just cuz we want to. Same reasons we’ve been !!! all along. But seriously, we like a challenge, it seemed like a fun way to press our boundaries, we like to play, it was cheaper than hiring the real Stereolab to open for us and I look fantastic in a dress. So there. That seems like enough good reasons, no?”

As If is out now on Warp.

Watch the video for "Every Little Bit Counts" below and check out the band's upcoming UK shows after.