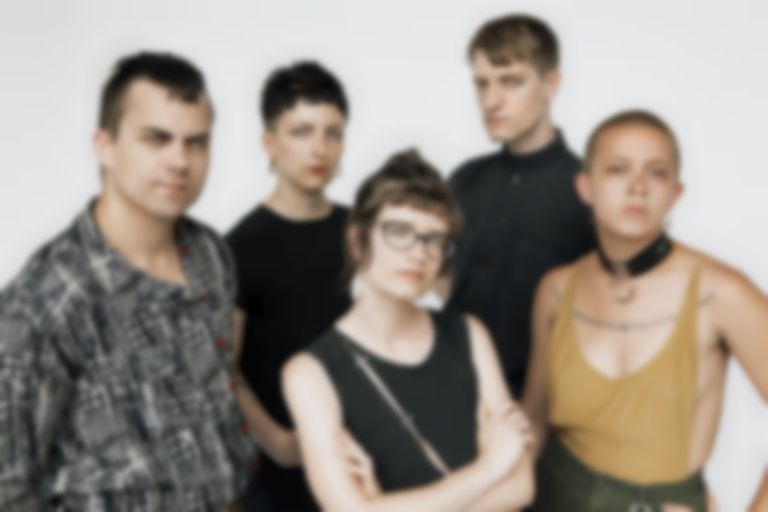 Brooklyn's Bodega are back with new single "Knife On The Platter", the second single to be shared from their forthcoming mini-album Shiny New Model.

"Knife On The Platter" follows on from August's lead single and title-track "Shiny New Model".

Singer and guitarist Ben Hozie says of the new offering, ""Knife on the Platter" is a narrative song : I was imagining a top notch Gena Rowlands-esque actress who is cast in a mediocre gothic who nonetheless elevates the script's schlocky material through her absolute commitment to authentically live each moment of the play. She performs as if the gods are watching - she 'acts' as if each gesture will be set in stone for the future to see. That's a show business trick - when performing imagine your heroes are in the room. You will no longer mess around. Twice in the song Zeus responds via the lightning striking from Madison's guitar. That's the thing: even when you are totally alone and lost - someone is (or will always be) watching your actions. Choose wisely."

Their forthcoming Shiny New Model mini-album is their first since 2017's Endless Scroll, and was recorded in Connecticut's Power Station.

Speaking about their new collection of tracks, vocalist Ben Hozie says, "The mini LP Shiny New Model marks a series of firsts for us: it is our first recording with our new drummer Tai Lee, our first session at a proper studio (Power Station in CT), and the first Bodega disc produced within the group - production was handled by lead guitarist Madison Velding-VanDam. Pushing to be protean we bought a highlighter to different shades of our tastes: more traditionally melodious tune-smithing and bigger sounding sonics -> we even used a kick drum for the first time (although it was still standing on its side). As well as some studio improvising (unusual microphone placement, etc.) - we also experimented with improvising in studio (the vinyl and CD will end with an extended ten-minute version of our song "Truth is Not Punishment")."

"Knife On The Platter" is out now. Bodega's Shiny New Model mini-album lands 11 October via What's Your Rupture?, and is available to pre-order now.