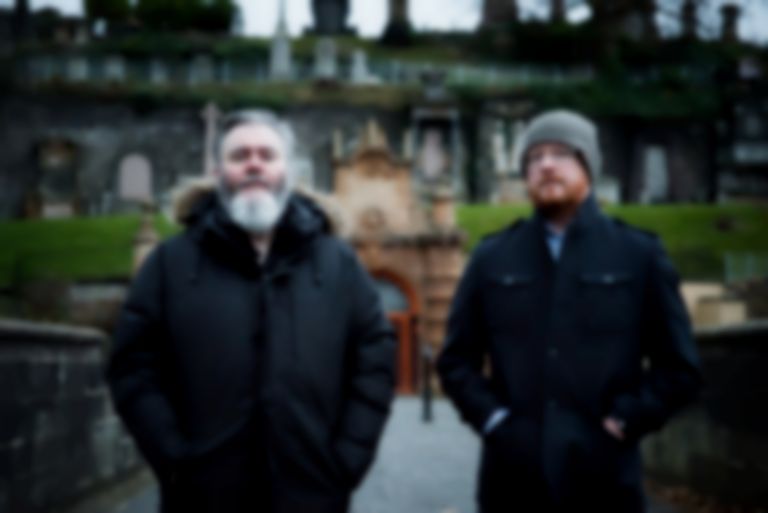 Malcolm Middleton and Aidan Moffat, aka Arab Strap, have returned with news of their first studio album in 16 years As Days Get Dark, and have shared "Compersion Pt. 1" as the lead single.

"Compersion Pt. 1" follows the duo's September comeback single "The Turning of Our Bones", which will also feature on their new album.

As Days Get Dark will be the first Arab Strap album since 2005's The Last Romance. Moffatt says of the upcoming LP, "It's about hopelessness and darkness. But in a fun way." He continues, "This album feels like its own new thing to me. It's definitely Arab Strap, but an older and wiser one, and quite probably a better one."

The album saw the duo reunite with producer Paul Savage (Mogwai, The Twilight Sad), who co-produced The Last Romance. Middleton says of working with Savage, "Paul brings comfort and trust, and a sense of continuity."

Moffatt adds of their new material, "I've never been interested in making slick records, but the new stuff sounds much fuller, brighter and better because we actually know what we're doing. I think for a long time we didn't know how to express what we wanted in a studio."

Speaking about their reunion, Middleton says, "We've had enough distance from our earlier work to reappraise and dissect the good and bad elements of what we did. Not many bands get to do this, so it's great to split up."

"Compersion Pt. 1" is out now. Arab Strap's As Days Get Dark album will land 5 March 2021 via Rock Action Records. They're due to play London's Electric Ballroom on 8 September 2021. Tickets go on sale Friday (27 November) at arabstrap.scot, where the album can also be pre-ordered.