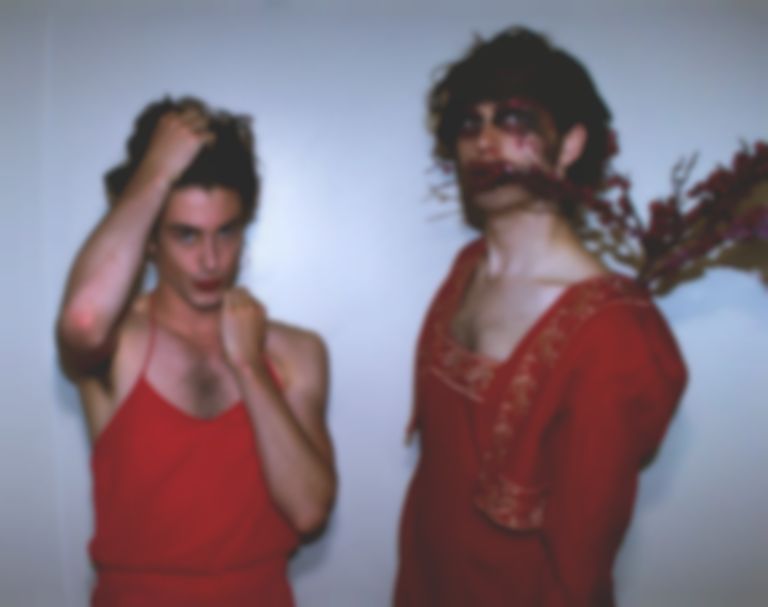 Gearing up to release their debut album next month, "genre-queer" duo PWR BTTM are premiering their new cut "Dairy Queen".

After the thundering guitars of album title track "Ugly Cherries", the band's new offering takes a more whimsical approach. Twanging refrains meander through high-flying aspirations, portraying an outfit capable of a hundred fabulous things - just as soon as their hair is clean. Contagious riffs and raucous breakdowns entice hook, line, and sinker, building and spiralling towards a perfectly poised implosion.

Band members Benjamin Walter Hopkins and Liv Bruce took the time to talk to us about everything from Ugly Cherries to airport toilets and RuPaul's Drag Race. Read the interview below, and stream the track after.

What inspired you to form a band and name yourselves PWR BTTM?

Liv Bruce: In high school I was hanging out with one of my friends in one of the sordid back alleys that I call home, and we were talking about hardcore queer band Limp Wrist, and we how good a name that is. We started thinking of other names that queer punk bands could use. The last one we thought of was Power Bottom, and I was like ‘I’m gonna hold on to that.’ A few years later I decided to start talking to people and see if there were any musicians who were interested in starting that band. I didn’t find any musicians, but I found Ben. The vowels thing is just purely utilitarian to keep people from finding gay porn when they’re looking us up. It’s always relatives for some reason. They’re always like ‘I tried to find your band, but I just kind of… uh…’ They think we don’t know what happens when you search Power Bottom with vowels, and we’re like ‘we know.’

What inspires you when you write music?

Ben Hopkins: Our friends. The scene we’re in in New York just has so many miraculous and amazing musicians that any time I feel like I’m running dry artistically, I just look around at the people that I call my friends and realise that they’re all such amazing artists.

Liv: There are all these great DIY spots, You can go to any of these places, on any night of the week, and you just see people who are so genuinely into it for the music.

Ben: The scene here is what I’ve been dreaming about being a part of, and now that we’ve sort of been able to play there more and more, it’s just such a fulfilling thing. We’re very lucky.

L: Our record is hugely influenced by the music scene in New York and the Hudson Valley region in particular. There were a lot of times when we were writing where we finished a song, took a step back from it, and we were like ‘oh, we were totally ripping of that band.’ I don’t think there’s… I hope we don’t get sued.

B: I think we’d do well in a lawsuit though.

L: Oh, well. Can you imagine the things we’d wear?

B: I was just watching that thing from Pretty Wild where she’s like ‘I didn’t wear six inch heels to court, I wore two inch kitten heels!’ That’ll be us.

L: It’s gonna be like on Dynasty. I’m gonna show up in veil, and reveal my face at the last minute.

L: Yeah, that’s gonna be the gasp in the whole courtroom. It’ll be great.

What can people expect to see from your live shows?

L: A catastrophe. A complete and total nightmare.

B: They can expect to see two people who love each other -

B: That’s funny actually. It’s us just snipping at each other a lot. It’s very loud, and it’s funny, and it’s a good tax break.

How does it feel to be putting your debut album out into the world?

L: It kind of feels like when you’re at the airport, and you really have to go to the bathroom, but you’re running to get to your gate… that’s the feeling that I think we both have right now. This urgency, and this knowledge that we’ll get to it eventually. It’s just this thing that we have to get out. I think I could probably come up with a metaphor that’s more flattering to us, and more flattering to the album than calling it, well, shit.

B: I was thinking about number one, not number two.

L: You and I have clearly had very different experiences in airports.

B: I cannot poop in the airport!

B: No! Maybe I’m just the more blissful airport pee-er.

L: I guess what I’m trying to say is that we’re very excited about putting the album out. It feels like it’s been a long time coming. It’s a lot of us, and we’re really excited to share it.

What do you hope to achieve with your first record?

What do you do when you’re not making or playing music?

L: He just texts me!

B: I text Liv about music. I play with my cat, who I love very much. His name is Klaus, after Klaus Nomi. He has lots of brain damage, so he’s very fun to play with. He’s always jolly. What do I do? No one’s ever asked me this question before.

B: WAIT, HOLD ON. I watch RuPaul’s FUCKING Drag Race. I have this lexicon of knowledge about RuPaul’s Drag Race that is taking up all of my brain space. I need to download it into an external hard drive and put it somewhere. When I’m not harping about my own fucking band, I’m just like, thinking about what Jiggly Caliente is up to.

L: One of the best birthday gifts I’ve ever been given was when Ben recited, from memory, every single contestant that’s ever been on RuPaul’s Drag Race, all seven seasons, in the order that they were eliminated. FROM MEMORY. It took about forty-five minutes, but he did it, and it was miraculous.

B: I actually invited someone from the Guinness Book Of World Records to come, but they didn’t return my call.

What was the inspiration behind your new single "Dairy Queen"?

L: “Dairy Queen” is one of the more collaborative ones that we’ve done, I think. I walked into a practice room at school one day where Ben was. I was just noodling on this guitar and I came up with the basic chord structure for the song, then I started singing a little melody to it, and then Ben, his eyes kind of glazed over with fire, and he grabbed the guitar and he started shredding the part.

B: I was possessed by Aphrodite.

L: The lyrics just seemed like nonsense, and totally meaningless to me when I was writing them. It’s kind of about us trying to balance our ridiculous, huge ambitions with the day-to-day of our lives. Specifically this year, ‘cause I was finishing from college, and felt like I had all these really exciting things that I wanted to do with Ben, and then I had to be on campus at 8:30 in the morning for my lab science class, and little things like that.

B: I moved back to upstate New York after graduating to stay with the band, and there was a period of time where I was both unemployed and incredibly obsessive about finishing the record. So I was just calling Liv constantly, being like ‘and then, we’ll make fucking BUTTONS, and blah blah blah.’ I was crazy.

L: I would get out of my fourth class for that day, and I’d check my phone, and I’d have 15 missed calls, 40 text messages… So the song is kind of a humorous take on that aspect of our relationship. There’s all these brand names shoved in there, I think there’s at least one in every verse. The song almost sounds like a jingle, but it can’t be an add for any one company because every other company is in it too. I think all these brand names make the song this playful take on what does it mean to be successful any more.

Would you ever use your music in advertising?

L: Only – and make sure this is in bold in the article – only for millions and millions of dollars. It really depends to me on what company wanted to use it, and what practices they hold, both towards queer people, but also towards all people. I guess I don’t have any specific intentions of our songs ending up in advertisements, but if the right person wants it, or the right company did. If Grindr needed a jingle for the radio, or Sbarro…

B: Sbarro is like, if pizza was greasier than you thought humanly possible. It’s what my skin looked like from eighth grade to the sophomore year of college.

L: This is something that I want to put on the record. Ben and I both have very problematic skin. One company we’d really love to be sponsored by is Proactive.

B: LET’S DO A PROACTIVE COMMERCIAL!