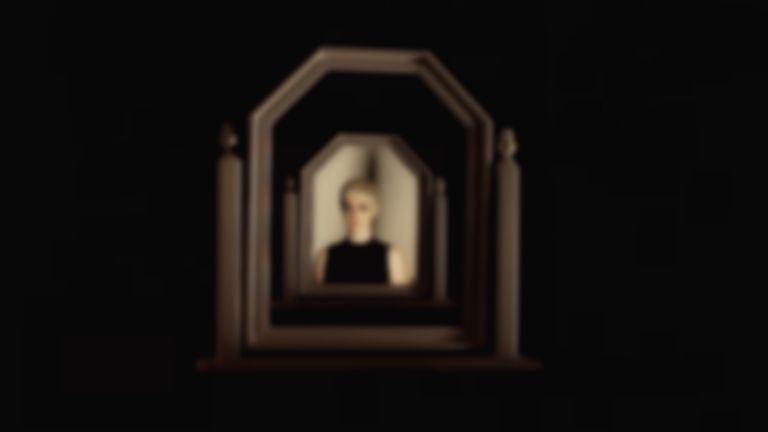 London-based outfit HAWK are sharing their shadowy new single "Mirror Maze" ahead of a new EP next year.

"Mirror Maze" is taken from She Knows, an upcoming short-player that sees HAWK toy with darker tones and textures. The band weave fluid guitars and psychedelic melodies together, with frontwoman Julie Hawk's ethereal voice cleaving the darkness in two - it's a dramatic cut, and it's often poignant. It's not the first time that HAWK have meshed ear-pleasing webs of noise with powerful political ideas.

Could you tell us about the new single?

Julie Hawk: "Mirror Maze" is about female body image and the conflicting standards placed on women's bodies. There's an awful lot of talk these days about empowerment and body positivity. Some of it is totally genuine and making amazing strides to helping to change standards, but in everyday life and in the media it's still very problematic. The song is about the expectation to be feminine, to be a certain shape, size and demeanour, but at the same time being shamed for other qualities that are deemed weak. Sometimes it feels like if you are pleasing one part of society, you are letting down another. None of these pressures should matter of course, but they do exist and can be very suffocating and damaging.

Matt Harris: We were going for a more industrial feel with the newer tracks. There's still our usual big reverbs and atmospheres but hopefully there is a more gritty feel to the percussion especially.

How did it come together?

Matt: Actually a lot of the tracks we were working on had become very grungey and shoegazey in the lead up to recording the new EP. So we wanted something a bit more up tempo to mix it up and it all developed from a desire to mix things up a little bit.

You've spoken a lot about political issues with your music - why is it important to speak up?

Julie: While our sound changed over the years, we also became closer as friends and more open and honest about things that we find inspiring in the world and the things we'd like to see change. Coming from a country where, historically, speaking out about sexuality and women's rights would have been a bit of a non-starter, I'm starting to appreciate how important and powerful it is to take difficult subjects and insert them into the normal, everyday conversation.

How does music add to the message?

M: I'm more likely to pay attention to the message if there are extra things attached to illicit an emotional reaction. I think music can help to do that and we are trying to create that extra level of reaction when we talk about causes in songs.

What's next for HAWK?

M: We have finished recording our new EP and will be releasing it in 2017 alongside working on new material with an album on the horizon at some point in the future.

What are you looking forward to in 2017?

M: Having just relocated to Berlin we are really looking forward to getting stuck into the same time out there. But there is definitely an element of the unknown and we are desperate for it to go well.