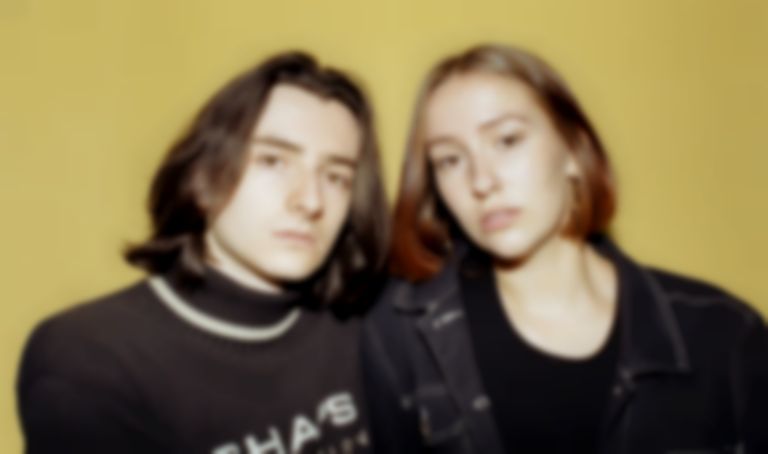 Having first caught our attention back in March with the smooth, sultry soul of "Your Eyes", the London-based two piece return with "Skyline"; a track which only acts as another example of why they are a bubbling act to keep an eye on.

Blood Beach are Lucy Hayes and Sleepy Eye, a duo who - by some sort of unknown cosmic workings of the universe - were put in the same halls in their first year at the Guildhall School of Music and Drama. Within weeks, the pair were making music together and it wasn't long before they had stumbled across a winning concoction of silky R'n'B and bedroom beats, where Hayes' fluttering vocals are perfectly complemented by Sleepy Eye's knack for polished electronic production.

Since their last release, Blood Beach have been quietly honing their craft, working away and refining the edges, roping in the help of rising hip-hop duo pals TM along the way, who only add to the intense, nighttime atmospherics of "Skyline".

The track bursts in with a glittering explosion of interweaving, feathery vocals, after which TM deliver balanced, understated verses that set the song's mood which ultimately acts as an elegant ode to London. Yet, it's the shimmering chorus where Hayes articulately paints a luscious picture of the city at night, intensified by the wandering synths that act as the city's twinkling lights, that you really get a sense of the atmosphere that the pair are able to create.

“We both came to London to chase music," explain the duo of the song's origins. "Everyone develops their own relationship with it as a place, and 'Skyline' is about that. It’s about finding a sense of home, and specifically about how beautifully relationships can grow in a place like London. Everything is changed, enhanced. 'Skyline' captures the unique feeling of being inspired, enveloped and overwhelmed by the city you live in.”

Ultimately, the song perfectly illustrates that strange sense of wonder, enchantment but also isolation that living in the ever-changing city can bring with it and acts as a startling reminder of Blood Beach's potential.

"Skyline" will be released everywhere on Friday 29 November and a new EP is set to be released some time in 2019.