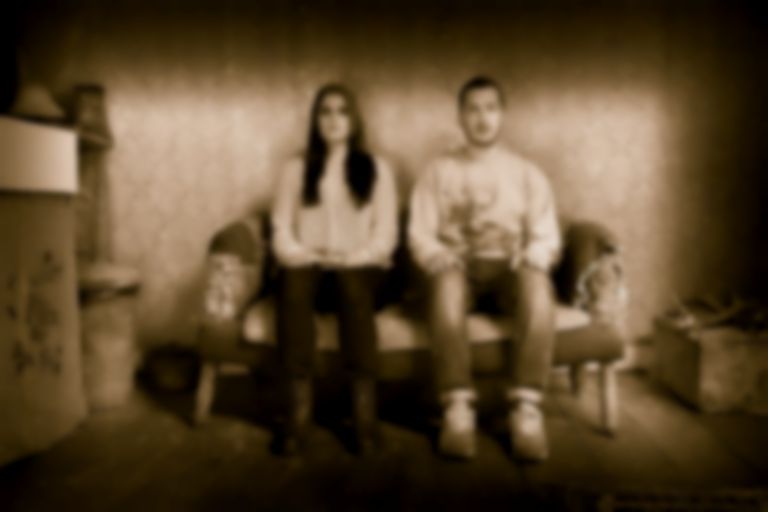 Each week, we here at The Line of Best Fit catch up with one of our favourite artists to find out about what inspires them from outside of the world of music.

In the past, we’ve spoken to Xiu-Xiu about birdwatching in Guyana, to Poliça about the importance of friendship. Prince Rama about the art of P.A.U.P (post apocalyptic urban planning) and most recently Kisses who unveiled their idea for a unique business venture.

Today, we catch up with Snow Ghosts – a London based duo comprising the talents of Throwing Snow’s Ross Tones and vocalist Augustus Ghost – also known as vocalist Hannah Cartwright. Having just released their debut new album A Small Murmuration into the world through Houndstooth, the duo tell us about their fascination with tales of the land, Time Team and Tony Robinson.

When I first came over to live in London there was a lot of adapting to do. I’d been in the Middle East and then Australia so to say it was a bit of a culture shock is an understatement. Then I met Ross and found someone who seemed to share a passion for all the things I had learned to love about England. I suppose because I haven’t been here very long, that came as a surprise.   I did history at A-Level and it has always held my interest, so to come to a country that was steeped in it was truly inspirational.

I was staying by the river in Brentford, which I was soon to discover is on the site of a famous civil war battle. It was also a pre-historc settlement and a Roman village and there’s a church on the high street that has had a chapel there since the 12th century, but it just looks like any normal town on the outskirts of London.   Historical imagery is a big part of my lyric writing as I love to write about issues that haven’t changed over time. I love walking through places that have been the same for hundreds or even thousands of years and trying to imagine I’m living in those times – although often I end up coming to the conclusion that I’m extremely lucky to be living now. For one thing, my chances of being burnt as a witch or catching the bubonic plague are greatly decreased!   Then I discovered Time Team! Getting up late on a weekend with a cup of coffee and curling up to watch it became my own guilty pleasure… one I was soon to discover I shared with Ross. In fact, he was the only person I knew who didn’t just roll around laughing at my nerdy obsession with Tony Robinson.

One of the first episodes I remember talking about to him was set at a dig in Syon Park for a Brigettine Abbey, which is just round the corner from me, however most of the digs are not so close and it’s amazing to be able to dive in to a piece of history that’s half way across the country and find inspiration to get out and explore it.   It probably all stems from a bit of a fascination with the cycle of life and death. It seems to me the most natural thing in the world to be curious about one of the biggest questions, and I suppose that learning about it through the West Country burr of Phil Harding completely takes the fear-factor out of it. You just can’t take someone seriously when they’re sweating through their hat.

In some respects it is a rather safe and comical way to explore some of the country’s most horrific and fascinating historical events.  This year sadly hails their final dig, so we will have to focus on some other nerdy pursuits that we have in common….perhaps twitching or chaos theory…