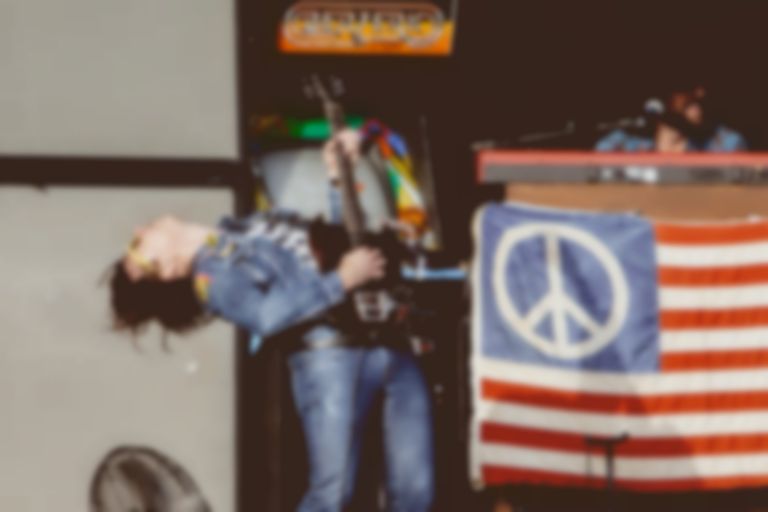 On a sunny Saturday afternoon in June, Clapham Common is usually the preserve of sunbathers. Today (Saturday 4th July) it’s converted in part into a music festival site for Clapham Calling.

Walking across the common I was asked by untold touts if I wanted to ‘buy or sell tickets for Noel Gallagher’. And this is the story of the day, the focus is the headliner, even the website proclaims it’s ‘Noel’s last London show of the year’, despite the heavyweight presence of Modest Mouse, Ryan Adams and Wolf Alice on the bill.

Entering the site, the first thing you notice is the weird set-up. The main stage is at one end and the smaller ‘other stage’ at the other, but at an angle. While the intention is for the audience to simply turn around between sets (the minute an act finishes on one stage, another starts playing on the other) the position of the other stage makes viewing very restricted, coupled with limited standing room. Perhaps they should have been positioned like the goals on a football pitch instead.

Modest Mouse make a subdued, low key entrance which is explained after opener “Paper Thin Walls” with singer Isaac Brock telling the crowd their Independence Day isn’t going to plan, “Guess what we were liberated from today? All of our musical equipment.”

They gamely play on, but aren’t helped by the sound, with their angular guitar riffs getting blown and buffeted in the wind. The songs are occasionally audible, but mostly muffled, even the joyous funk of “Dashboard” is hard to discern. “Float On” rouses some of the crowd, but Modest Mouse are defeated by technical difficulties, which is a great shame - it’s like a master sprinter receiving a bad handover in a relay race and not able to finish it.

But all is not lost on this day of American celebration as Ryan Adams picks up Modest Mouse’s dropped baton and whilst he doesn’t exactly sprint with it, he does strut masterfully to the finish line. His set is also occasionally hampered by sound problems, but his display of showmanship and no little swagger shows it doesn’t appear to bother him in the slightest.

The stage is dressed with video machines, a stuffed tiger and an American flag draped over the keyboard (the stars are replaced with a CND banner). With his tousled hair he looks like he’s just gotten out of bed, yet opens with an incredibly assured “Gimme Something Good”.

For all his reputation as an enfant terrible, his music displays an incredible tenderness - “Kim” being a standout  - yet the cathartic nature of the song is seemingly lost on a lot of the crowd, with the bars still visibly heaving. The set spans his career and he pays tribute to his friend Gallagher "My ultimate songwriter of all time, whilst I’m alive. Imagine having to open for some fuckers like Slayer?"

“Peaceful Valley” sees the vocal tipping its hat to Robert Plant and the solo to Jimmy Page but his maverick touch adds something truly subversive to his take on classic rock. He’s ultimately making music for himself, not seeking the crowds’ approval. In other hands such music could sound gauche, but within the wider narrative of his songbook it works brilliantly. This is how you play a festival, spending an hour in the company of Adams’ music time flies by.

Wolf Alice headline the Other Stage and when they rip into “Fluffy” it prompts some movement towards their end of the common. Given that they’re currently number two in the album charts with My Love Is Cool, the stage they’ve been given seems a little incongruous, but they don’t seem remotely troubled by it.

The visible ease with which they’ve moved up the ladder, they play with no nerves and a healthy dose of cockiness, shows they’re ready for this level. Singer Ellie Rowsell’s singing is so strong throughout it cuts through the mighty sheets of noise produced by the band.

“You’re A Germ” starts with her voice and clipped guitar, with guitarist Joff Oddie adding some lovely discordant shards and its chorus - "1 2, 3, 4, 5, 6, 7, you ain’t going to heaven - is sky-scraping. It’s not just loud-quiet-loud however, the four cogs of the Wolf Alice machine work together beautifully.They become even better, the line in the chorus of the delicate “Blush” - "Punch drunk, dumb struck, pot luck, happy happy" - lifts the song irresistibly higher than anything tonight’s headliner will reach.

There’s also the joyful pop of “Bros”, with bassist Theo Ellis introducing it as “A song about friends and I can see everyone here is friends, sweet.” He does the majority of the onstage chatter, being more talkative than the more reserved Rowsell and it works perfectly, adding a dose of cheeky chappyness to their vibrant, yet serious music.

They close with “Moaning Lisa Smile”, which is the best song The Sex Pistols never wrote, John Lydon would have killed for the the lyric “Scrap the blues, if the blues don’t work” and the rock and roll swagger of its riff. I could watch Wolf Alice every night of the week.

Noel Gallagher sets the tone for his headline set with “Everybody’s On The Run” - undeniably accomplished songs with singalong choruses and suddenly the common comes to life, albeit for a celebration of nostalgia and familiarity.

Yet the addition of a brass section seems to be the limit of him flexing his musical muscles. He introduces “Riverman” from this year’s Chasing Yesterday with “This song has a saxophone on it, don’t be alarmed”, which isn’t a line you couldn’t have imagined Definitely Maybe era Oasis using.

The Oasis songs delight the crowd, ranging from “Digsy’s Dinner” (which he should have left in the fridge) to a rousing “Champagne Supernova”, but he seems more engaged with his solo material compared to the perfunctory delivery of his alma maters tunes.

Musicians can’t stay in their 20s forever, but I wonder how tonight’s set would have been received if it featured the music from the scrapped Amorphous Androgynous record instead? It wouldn’t have as been as crowd pleasing, but it might have been a lot more interesting.

Ironically Wolf Alice have that unmistakeable buzz about them that Oasis did when they broke through - the gang mentality, the songs and a coolly detached singer with an amazing voice and Ryan Adams has the chops to deliver his take on the lexicon of classic rock, yet ultimately please himself. And both were wonderful. Maybe Noel Gallagher should have thought twice when he looked at the line-up.