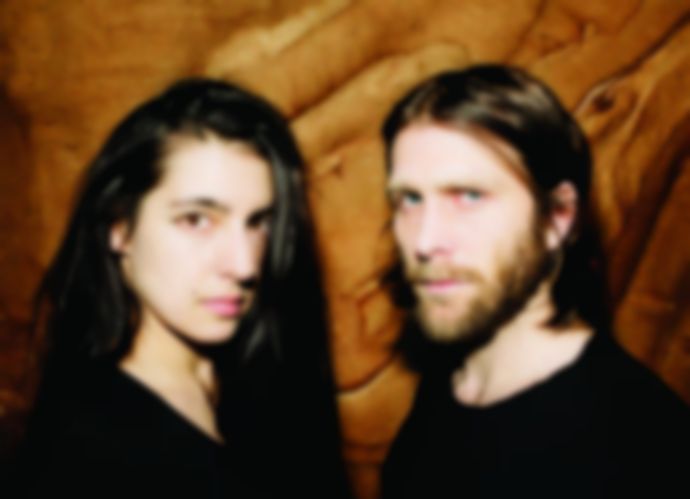 Silhouettes of drums of all shapes and sizes can be made out through the smoke machine haze of Village Underground. Centre stage sits a large golden gong, and a sense of anticipation starts to grow amongst the crowd.

The Swedish husband and wife duo are here to tour their fourth studio album Rhythm. Their evocative mix of percussion and vocals has been classified as everything from pop to jazz, and many more in between. They’ve toured with artists including Lykke Li, Arcade Fire, and The Thing, playing up to 120 shows a year; their latest record may have received critical acclaim, but for Wildbirds & Peacedrums, the live performance is what it’s all about.

In the past they’ve been lauded for the pure simplicity of their stripped back performance, but stripped back doesn’t seem the right term to describe the show tonight. It’s hard to believe that the wave of sound that fills the bare-brick arches is being produced by just two people; melodic rhythms and dubby synth bass forming an almost hypnotic accompaniment to Mariam Wallentin’s acrobatic vocals.  At times she seems to be playing several instruments at once, vocal effects overlaying her voice so she sounds as though a whole choir is singing, yet in places where they bring it back to just the basics of drums and voice, the effect is no less arresting.

After playing a range of tracks from their extensive back catalogue, they continue to play Rhythm through in its entirety. The record’s complex polyrhythms and experimental vocals whilst impressive in its own right can at times be a challenging listen, however live the songs are instantly accessible, mixed with a phenomenal light show of glowing multi-coloured hues, the driving club like beats encapsulate the crowd and the room feels as if it’s pulsating.

The driving sub-bass and infectious poppy vocal hook of first single “The Offbeat” are reminiscent of 90’s dance pop such as Portishead or Massive Attack, and the gospel-like vocals of “Soft Wind, Soft Death” are particularly striking, and throughout the show Wallentin and Werliin show how effortlessly they can borrow from an almost endless range of styles and genres and bolt them together to make them entirely their own.

As they draw to a close, with the final track from the album, the frantic beats and effected synths give way to Wallentin singing a capella “Everthing is happening/all the time” before building again as the crowd swaying in time as if entranced, before erupting in enthusiastic applause.

Tonight, Wildbirds & Peacedrums have shown that experimental and intelligent music doesn’t mean pretentious or inaccessible, and whilst for this project they’ve shunned the guest collaborations for which they’ve become well known, they can still put on an incredibly impressive show with just the two of them.