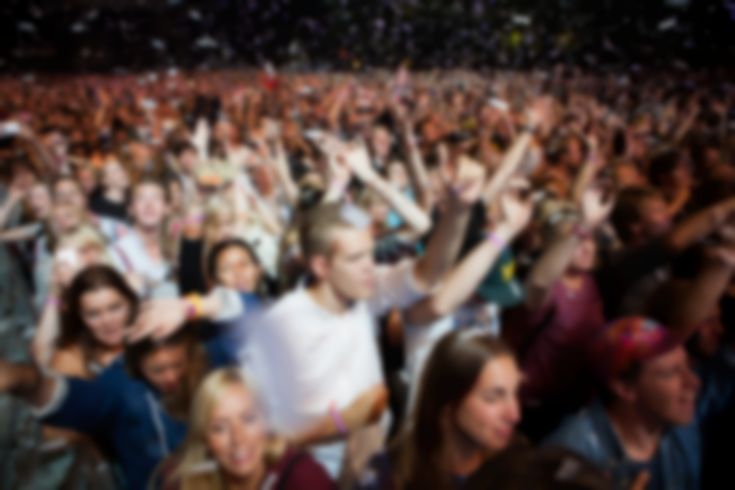 The heavens opened but Way Out West Festival persevered: we look back on the last day of Gothenburg’s premiere festival featuring Robyn and Röyksopp, Mos Def and more.

Planningtorock’s deep voice rises above tense cyclic beats as we make our first foray into the Dungen area of the site for the Saturday’s first offering. Possessing a wonderfully smooth yet somehow instantly subversive voice, Jam Rostron - rocking some incredible bright fuchsia metallic trousers - weaves her way around the stage; moving with the minimal, dry and dramatic sounds of All Love’s Legal-featured “Public Love” and the powerful “Human Drama” in which she insists “gender is just a lie.” Swaying from side to side there is an understated elegance to her performance, the delicacy of her constructions undercut with highly strung synths perfect for easing us into the day.

From one incredible lady to another, Elliphant heads up an incredibly packed Linné stage. Before she arrives we’re convinced that the above capacity tent is - at least in some part -thanks to the torrential downpour that began over an hour earlier, but as she emerges and just about every hand is thrown in the air we’re soon convinced otherwise. A fierce force of nature, Ellinor Olovsdotter’s bold, bolshy dance hall beats are just what this drenched crowd needs. The anthemic swells of “Down on Life” and the rallying, demanding cries of “Revolusion” providing particular highlights. Taking the mood down a bit, a returning Neutral Milk Hotel brave the rain with the rest of us at Azalea. Disbanded in 1999 by a disenchanted Jeff Mangum, they re-emerged in 2010 like returning heroes – the intervening years and their last record In the Aeroplane Over the Sea having earned them well deserved cult status. Though they’re playing the second largest stage it somehow still manages to sound like a wonderfully intimate affair. Opening number “Two Headed Boy” is as delicate and fuzzy as I remember from the grooves of the record and delivered with a haunting warble. “Oh Comely” swells with rich folksy guitar strums as Mangum’s voice breaks under the weight of its own emotional intensity. It’s bleak but warm, visceral but also timid and as heartbreaking as it strangely euphoric.

Back to Linné and Stockholm’s own Jenny Wilson picks up where Elliphant left off; whipping the crowd into a frenzy with her politically charged, futuristic sonics. Drawing on material from her incredible album Demand The Impossible!, Wilson’s set is dominated by harsh industrial keys, aggressive, demanding drums and powerful vocals that demand you pay attention.

Yasiin Bey, better known to you and I as Mos Def, soon takes to the stage with minimal fuss - scattering rose petals from his hat as he goes. Stood with nothing but a small booth and a beat man behind him, Bey’s fancy footwork and ernest presence fills a stage space that many others with more gear or people would struggle with. Highlights come from “Mathematics” (which has the entire crowd bouncing as one), “Hip Hop” and the rolling bass of “Spread Love Every Day.”

The day’s main attraction don’t disappoint. Robyn & Röyksopp arrive in phases. First comes Tromsø pair Röyksopp featuring Susanne Sundfør, then comes Robyn – the latter really kicking the set into gear. Bounding on stage in shimmering silver boxing shorts and bright red platform trainers, the Queen of scandi-pop announces her hour long reign by swirling around the stage, humping the air and shaking her ass to the hard bass beats of “Love Is Free.” As an opening statement, it’s breathtaking; as an introduction to a live Robyn show, it’s perfect. As she makes her way through songs like “Be Mine”, “Call Your Girlfriend”, “Dancing On My Own” and “With Every Heartbeat” you really realised just how incredible she is, and just how many vintage classics she is responsible for. It’s every bit as intoxicating and infectious as it is on record, perhaps even more so because the lady has some serious moves.

Returning to the stage in a silver shell suit for the collaborative portion of the evening, Robyn could not be more iconic. A futuristic vision of pop perfection she is flanked by Svein Berge and Torbjørn Brundtland who - in matching outfits and silver/gold glittering full face masks - introduce the sci-fi swells and techno leanings of “Indestructible” while Robyn writhes around on the floor. In the thick of the crowd every beat is accompanied by a bead of sweat. “The Girl and The Robot” and “Do It Again” provide that perfect final rush, the euphoric trance of the latter raising up through the crowd like a shared fever - everyone is in a state of delirium. Walking away as glitter cannon’s fire into the night’s sky, we know that state will carry on through the night.