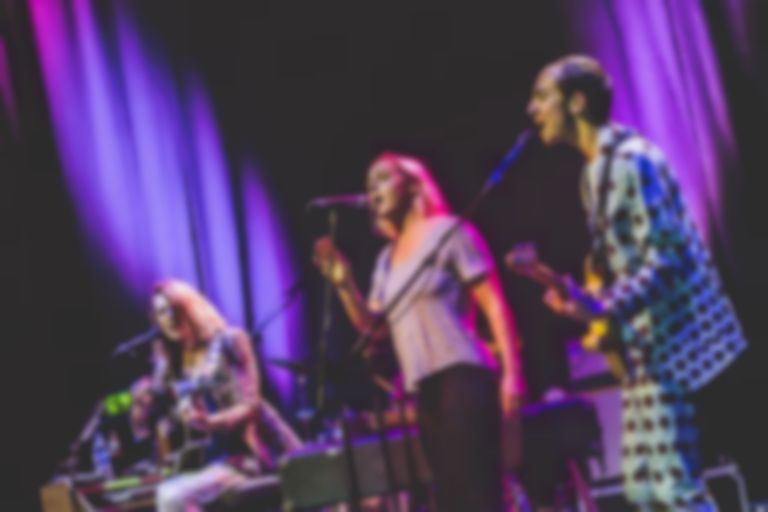 When you start a business, it’s pretty hard to imagine that a decade later you’ll still be doing the same thing. But that’s the case for Transgressive, the musical baby of Toby L and Tim Dellow. As a record label, it’s been behind some of the most powerful bands of the last decade, from Foals, to Johnny Flynn, Africa Express and Pulled Apart By Horses. Transgressive has doubtless made its mark on the music industry, long acting as the first stepping stone for hundreds of musicians – ever pushing forward, expanding and developing their repertoire, it’s a label that’s stood strong where just about every other independent has faltered.

Celebrating its 10th anniversary,Transgressive held a huge bash featuring some of its biggest names. With Mystery Jets, Johnny Flynn, Marika Hackman and Dry The River all on the bill as well as a host of special guests, the celebration brought together new signees and old to perform together for one night.

For many of the artists on the bill tonight, Transgressive were “the first label that took notice,” says Blaine Harrison of Mystery Jets during their set. Transgressive has always built its name off a socially responsible label, helping sceptical young musicians find the perfect line between fantastic music and pop principles. Their leftfield music taste shows in their roster, but it shows alongside a whole host of landmark bands who’ve shaped the music industry over the last 10 years.

What’s most enlightening about tonight, and about Transgressive as a label, is seeing the Barbican filled with faces young and old, all dancing up and down the aisles of what is principally a classical auditorium. Filled with everyone from young fans just discovering Transgressive’s catalogue to those who’ve followed the label since they first signed Johnny Flynn nine years ago, there’s a whole host of people present.

The Mystery Jets, playing their first show in almost two years, play a whole host of new material. The new songs sound as catchy as the old, touching on influences from home and further abroad as the band cross through everything from African highlife to catchy upbeat American pop. Matched with old favourites – their energy is unmatchable.

Marika Hackman is also a sensation tonight, showing a huge crowd just why her leftfield approach to folk music is the most exciting music in the genre for years. It’s no wonder that she’s got the ear of Laura Marling all night too, joining her onstage for a Transgressive ensemble during the encore with Johnny Flynn and the Mystery Jets.

Cosmo Sheldrake is one of the newest names to the Transgressive roster. Signed by the label earlier this year, his music twists everything from gyspy music to trip-hop, his music if flourished with different sounds. Performing in the atriums as hoards of fans arrive – his multi-instrumental talents make for a bubbly melancholic atmosphere to set of the evening.

The highlight of the evening though is Johnny Flynn, performing with the Sussex Wit and Cosmo on keyboards. As one of the oldest names on the Transgressive roster, Flynn’s has a huge breadth of material to show, but it’s his stand out hit "Tickle Me Pink" that gets everyone going.

It’s wonderful seeing such a parade of Transgressive’s talent here –and it’s funny to think that when I was first refining my music taste, these were the first bands I noticed. That goes for seeing them live as well, as a 15-year-old music fan and man about London, Transgressive’s artists had an energy that no other live bands at the time quite captured.

I wanted to ask Toby and co whether the original ethos of the label had changed much since day one – and whether 10 years on, they thought they would’ve got this far. As teenagers they started this dream after meeting at a Bloc Party gig. Nowadays they’re the forefathers of one of the friendliest labels in British music. May their reign continue.