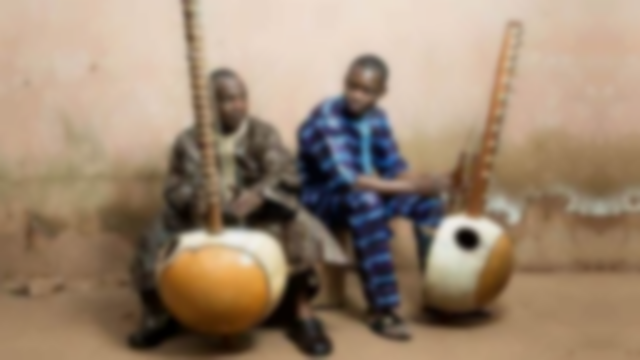 I guess since you’ve landed here you’re expecting to read some sort of review of Toumani and Sidiki Diabaté’s show at the Barbican tonight. The thing is, I’m kind of struggling. For while the Oxford English Dictionary helpfully provides 464 meanings for the word ‘set’, 396 for ‘run’ and 250 for ‘strike’, I’ve been through it with a fine-toothed comb, and there isn’t a superlative in there that even begins to capture how glorious this performance was.

I guess I could start with some basic observations. Toumani and Sidiki: father and son. Both play the kora, which is “a West African instrument with twenty-one strings, combining features of the harp and the lute”. (OED, all is forgiven). It looks like a bulbous cross between a banjo and a miniature double bass, and the different styles in which the men hold their instrument may or may not be a generational thing, but it certainly fits the narrative, so here goes.

Sidiki – Diabaté junior – holds the kora closer to the body, youthful and casual. Toumani, the master, leans in close, hunched over his instrument in concentration, carefully eeking every last note from its body.

And then there’s the Barbican. As ever, the venue is majestic. The sound is crystalline and full. While the comparisons to the lute and harp are technically valid, the depth of sound the instrument provides is unlike anything I’ve ever heard. There can be no better arena in which to hear it. Closing your eyes, it’s possible to imagine a full orchestra on the stage. Alas, it’s only father and son, perched on simple stools in flowing Malian boubous, playfully and dextrously riffing on a three note melody.

The show starts with Sidiki on the stage alone. He opens with a high, pressing sound, working different layers of texture through the piece, before finally allowing the fullest, loveliest melody you’ve ever heard to burst into bloom. Even on his own, he makes the noise of ten men. When he helps his father – walking with a visible limp – onto the stage, the pair repeat the trick for what seems like a heavenly eternity.

The dynamic is marvellous to watch. Father and son know each other’s musicianship inside out and a game of cat and mouse ensues over another three note melody. Toumani takes it one place, sends it back to Sidiki who plays it out in another key, at another speed, repeat until, surely, all the possible combinations have been executed.

“Sidiki is a pop star in Mali,” says father, chiding jokingly but clearly proud that his son has joined him on this tour (and on the fantastic album Toumani and Sidiki). Few words are spared over the course of the night, with the music allowed to speak for the both of them. But those that are shared carry a poignance that help crystallise the beauty of the evening. Toumani explains that the music isn’t just the product of a generation, but of hundreds of years of the Diabaté clan.

Only one song gets any introduction, as Toumani encourages us to close our eyes and listen to “Lampedusa”, a song written and recorded in the wake of the tragedy off the coast of the Italian island of the same name. 360 Africans, many of whom had been raped and tortured by traffickers, died as their boat sank as they made their way to Europe for what they thought would be a better life. “People in Africa think only good things happen in Europe”, says Toumani.

Two notes chime throughout “Lampedusa”, forming the core of the melody. Life and death. Joy and pain. Hope and despair. Over the course of five minutes, Toumani and Sidiki capture essence of tragedy, the maddening futility of death, the infuriating disposability of life, better than a thousand editorials. It’s impossible not to shed a tear through closed eyes, and as the last note chimes out, it hangs in the air for what feels like a lifetime. Tonight was special; a performance never to be forgotten – a performance to make you tear up everything you thought you knew about what live music should be.