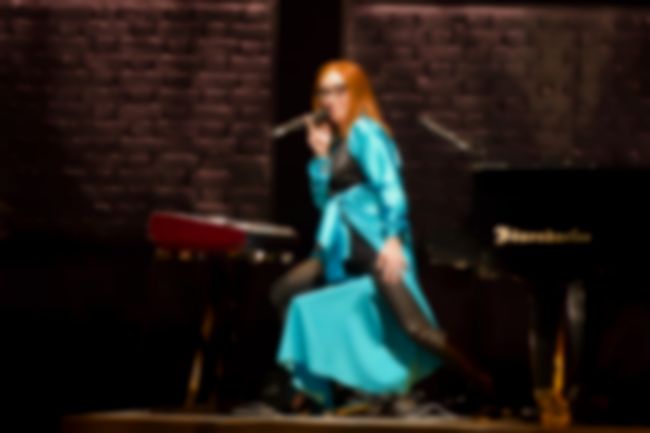 Tori Amos is no stranger to the Royal Albert Hall. In the past few of years she’s played here both with a string quartet and, subsequently, a full orchestra. Tonight, however, she is on her own, with a show ostensibly in support of her new album, Unrepentant Geraldines. We use the term ‘ostensibly’, as tonight’s performance boasts more of a greatest hits set, with only two new songs getting an airing.

Amos opens with 2005’s “Parasol”, from her eighth studio album, The Beekeeper. The new record is, at various points, reminiscent of The Beekeeper and “Parasol”, as one of the latter’s best moments, serves as a great start to the show. It comes with a new intro – a refrain of the “safe in my frame” lyric from the song - and the vocal here is powerful and assured. The song was written after Amos had seen a painting by Georges-Pierre Seurat – Seated Woman With A Parasol – in a book on Impressionism. The link to the Unrepentant Geraldines era is notable, as the work on it has – to an extent - been informed by Amos’ love of art and reflection on various paintings.

“Wild Way”, the first of the Unrepentant Geraldines tracks to be performed tonight works beautifully live, showcasing the unbreakably strong relationship between Amos’ voice and her Bösendorfer piano.

In the so-called ‘Lizard Lounge’ section of this tour, Amos has been playing two cover versions a night – different ones in each venue. Last week in Dublin, for instance, she played Miley Cyrus’ “Rooting For My Baby” followed by Sinéad O’Connor’s “Three Babies”, which was a nice way to bring together two artists bruised by the modern peril that is open letters. Tonight she chooses to revive her own interpretation of Lloyd Cole & The Commotions’ “Rattlesnakes”, originally recorded for her covers album Strange Little Girls (in 2001), as well as Nirvana’s “Smells Like Teen Spirit”, a cover first featured on the b-side to her 1992 single, “Crucify”. Both sound pretty special tonight.

The song that we cannot decide what to make of tonight is From The Choirgirl Hotel’s “iieee”. Originally a tribal, percussive chant, its stripped down, deconstructed live version on the one hand feels schizophrenic and uncontrolled, in a way which diminishes from the glory of its studio version. But on the other hand, there are moments, especially at the end, when Amos cries out “why does there gotta be a sacrifice?”, where we get goosebumps and a chills down the spine. The jury is still out as to whether it was disappointing or, in fact, genius.

In the odd-one-out corner we find Amos’ biggest UK hit, “Cornflake Girl” (if you discount the remixed “Professional Widow”). You can bet your life this one will always be a crowd-pleaser, but tonight it stands out for being played against a backing track of the 20-year-old original, complete with pre-recorded backing vocals. Predictably, this set-closer brings the house down but it’s curious that in an entirely solo set, Amos chooses to have the artificial accompaniment.

Top marks tonight go to Boys For Pele favourite, “Mr. Zebra”, gorgeous new ballad, “Invisible Boy” (Amos precedes this with an improvisation on the piano about there being many wonderful boys here tonight) and “Sugar”, which sounds just as vital and frenetic as it did when Amos first reinterpreted it for the live setting in the mid-1990s. The encore’s clap-along moment, “Take To The Sky”, sees Amos intermingling a small excerpt from “Datura”, a To Venus And Back song which she’s never performed live in its entirety - and the audience loves it. The show ends with a lovely, resounding performance of “Hey Jupiter”.

With Unrepentant Geraldines getting some of the best reviews Amos has had in a decade, it is a shame not to hear more tracks from it performed live tonight but, with so many excellent classics from the singer-songwriter’s extensive repertoire showing up on the set-list, it feels ill-mannered to raise a quibble.