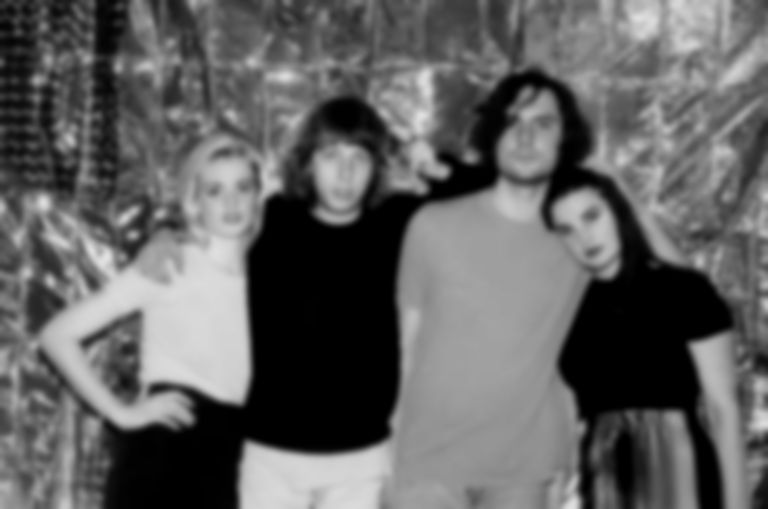 Montreal’s TOPS are bursting into efflorescence with the release of their second LP, Picture You Staring. But for me, it was not that record that initially charmed me into fandom, but their first album Tender Opposites.  I don’t quite remember what got me hooked on this band back in 2012; whether it was the soothing grooves, or Jane Penny’s delicate silky vocals that could put heaven’s angels to shame. Either way, I was irretrievably enamoured by their first LP, and I’m pleased to announce that I’m just as smitten with their second.

TOPS promptly took to Oslo stage at ten o’clock, opening their set with “2 Shy” and “Superstition Future”, two of the more lively tracks from Picture You Staring. The lyrics and the rhythm of the latter are bizarrely contradictory to one another; Jane repeatedly sings to the sprightly beat “cry all the way home, cry your tears all the way home, left with my lonely heart”, making it one of those upbeat songs of downheartedness, the kind you listen and dance to when trying to shake off the blues.

The crowd are cheerfully swaying and swinging by the time the band begin the opening beat to “Change of Heart”, but unexpectedly, the band segues into “Turn Your Love Around”, a song taken from their first album Tender Opposites. Olso even almost reaches the point of jiving before TOPS take a breather and have the lights dimmed for the second half of the performance.

Taking a more pensive tone, Jane changes into her honey-hushed, night-time voice and murmurs “I know that I could love you”.  The band play beautifully in sync with Penny, and every element of this song is mesmerising, from the lyrics (“I knew that I would find you, our two roads they lead the same way, to the same place”), to the whining guitar chords that sound almost as though they are melting away.

“Outside” is another ridiculously spellbinding song that can send you into deep melancholic or nostalgic reverie. Similarly to “All the People Sleep”, its melody is ambrosial and Carriere’s incredibly hypnotizing guitar solo towards the last minute puts the cherry on top.

TOPS capped their set with “Way to be Loved” and “Rings of Saturn” for their encore, the latter being one of my personal favourite tracks from Tender Opposites. Their confidence has evidently grown in the past two years, along with their fan base - what was once a half empty social club in Leeds is now a jam-packed venue in the capital. With two distinguishable, charming albums, let TOPS lull you in love.