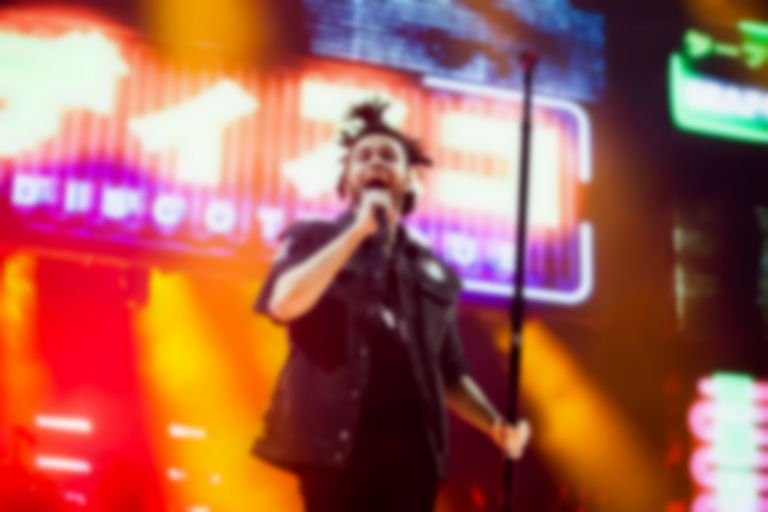 It’s hard to fathom just how big some artists have become, especially when they’re internet-raised. Being so entrenched in a personality and set of songs for so long makes the change even more imperceptible. Such is the case with The Weeknd; Abel Tesfaye has been a constant presence for the last few years to those with their fingers on the pulse, but it’s only been these past six months or so when things have reached such heady heights for the Toronto R&B artist. If anything’s going to be a wake-up call then a nigh-on sell-out O2 Arena will just about do it.

Back in March, Tesfaye was playing London’s Electric Ballroom and less than a year before that he made his debut UK appearance at the tiny Wilton Music Hall a few miles across town. “You know, I didn’t think we would sell out this tour but that’s the last time I doubt the XO family,” Tesfaye remarks, as he looks out over the sheer masses of people. He really shouldn’t have questioned himself, having packed out an arena more accustomed to hosting Paul McCartney and co with surprising ease. Normally it takes a few hit singles or at least a high-charting album to sell out these kind of places but dozens of XO merch clad fans filling the seats prove that niche, cult-like followings are worth just as much as mainstream radio play these days.

His major label debut – Kiss Land – lays the ground work for the evening’s show, which Tesfaye claims is the “last official gig of the Kiss Land tour cycle”. A key characteristic and quality that sets the record apart from the Trilogy ‘mixtapes’ is the cinematic breadth and – fittingly – its tracks blossom into the live setting too, as deep bass and John Carpenter-esque synth lines swell to engulf the entire arena.

The older tracks (Tesfaye announces his intention to “play some of the classics” to mark the special occasion) evoke the biggest reactions though: “The Morning” causes the first singalong of the evening (you sense many friendship groups are “sharing a moment” to the soundtrack of it) and “Wicked Games” sees thousands of fans scream back “just let me motherfucking love you”. Not many concerts can boast that.

Tesfaye’s on-stage presence has been amped up a notch too – he’s no longer the shy underdog, glued to centre-stage. Set against a backdrop of Tokyo-esque neon lights, his stage show has also been given a makeover: signs flashing “Discotheque” and “Bar” are interspersed with eerie images of expressionless women and the odd girl-on-girl porn shot. It’s here – right in front of 20,000 eyes – that a particular aspect of The Weeknd’s persona becomes increasingly harder to reconcile. As Lauren Martin noted in FACT, “Tesfaye’s decline from tortured soul to lecherous beta male over the past few years has been a sobering experience”. Whilst House of Balloons portrayed the 23-year-old singer, who by his own admission tonight didn’t even leave Toronto until two years ago, as a tragic hero, a lothario often seeking more than just physical love, Kiss Land is less likely to court sympathy. “Artistic licence” may be enough for some to overlook the often repugnant lyrical content on record but elements like the recently-launched official Kiss Land Tumblr page – which sees photographers snapping only the most photogenic fans – are a bit too much. Even in a year where time has been turned back several decades by Robin Thicke, the sleaze-bar aesthetic onstage seems both distasteful and very dated.

Coming back for a heavily-requested encore, Tesfaye spends the last minute or so of the final track looking directly at, not the audience, but a camera positioned at stage-left. The lighting cascades over his signature dreadlocks as he sings the last few lyrics directly into the lens, with his face blazoned across several screens situated all around him. It’s an unorthodox ending, but it works, capturing a heartfelt moment in a setting almost incapable of such a thing.

The Weeknd’s strengths, though, come when he appears most human. As with one of his previous shows in the UK capital (at West London’s Supper Club) – a gig primarily for fans and allocated via a democratic ballot – there are brief moments of sincerity where it’s impossible not to warm to the Canadian. “Guys, I am actually lost for words right now,” Tesfaye gleams with a glimmer in his eye before he dedicates “Wanderlust” to “the entire UK” for always being supportive of him. Compare this to the seedier parts of the heartthrob shtick and it feels at times like there are two different performers on stage: one verging on sublime and one on smutty. As lights go out, he waggles his tongue provocatively to female fans and departs the stage in the same way he’s occupies it all night – a conflicting character, but a compelling one nonetheless.