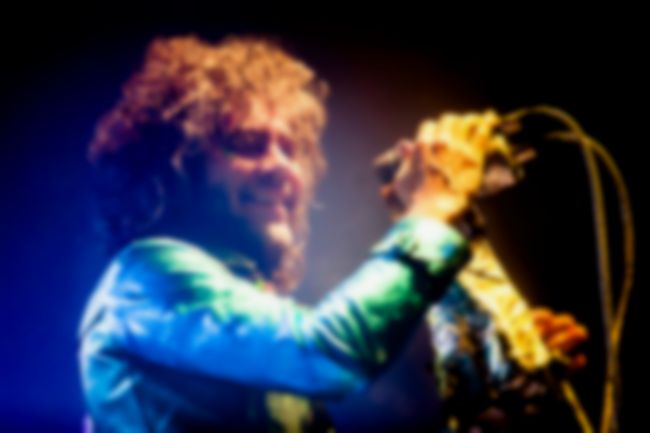 It’s now been thirty years since The Flaming Lips first brought their evangelical like music to the world – forgoing the boundaries of psychedelic rock, and replacing the old stereotype with science fiction and space opera. And now in London, a week after Wayne suffered an illness that led him to reschedule this very performance, they’re on a mission to alter perceptions further.

Gone is the fluffy bunny, cuddly animals, party in the sun, festival band that saw Q Magazine tip them as one of ’50 bands to see before you die’ in 2002 – and replacing that, is a stream of black confetti that shrouds white fibre optic cable’s we see coil their way around the stage.

Coyne himself seems careful to not recreate last week’s mistakes – which critics delved into heavily in the reviews that followed – instead, acting as the kind, gentile soul he’s always been, even stopping at one point to quietly consider a fan who was having problems dealing with the intense light show.

A rousing cover of David Bowie’s ‘Heroes’ – as recently previewed in the infamous US TV appearance where Wayne appeared naked on live television – brings the crowd to heart as they start jumping in fits of pure passion, throwing themselves towards the strobes that spit out of the lighting rig.

The set, as a whole, features a heavy dose of tracks taken from the new album, The Terror, all of which seemed to be received incredibly well by the audience, blending perfectly into the Flaming Lips live set despite Wayne’s comments last week that “some of these new songs just aren’t that good.”

But all that’s forgotten as the dizzying whir of lights, visual effects and trippy visuals come to a climax in ‘Silver Trembling Hands’. As encores go, it’s like no other I’ve ever seen. As the audience shift from jumping to standing in blind amazement, Wayne and co see through two more songs before parting ways in a cloud of strobes and smoke.

Tonight we saw the definition of a spectacle.