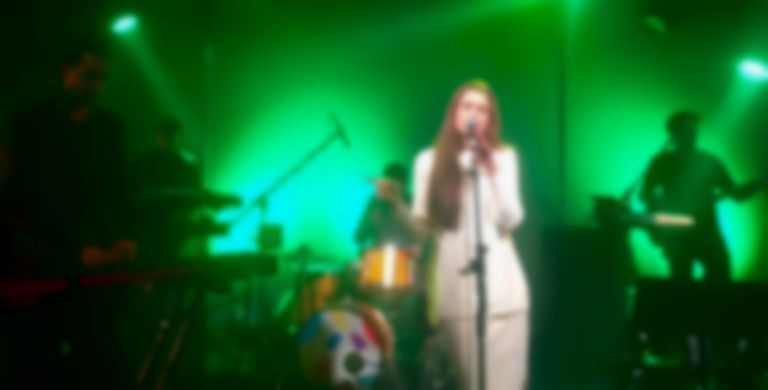 It’s a live return for Londoners Arthur Beatrice and if I was any keener I’d have shaken them out of bed.

Their band name is pulled from a dog naming shortlist, but it’s their only misfire; most great bands transcend their names, so it’s unimportant.

With understated cover art reminiscent of Peter Saville’s, rare gigs and the confusing moniker, Arthur Beatrice haven’t exactly worked up a sweat promoting themselves. That they have an imminent second album will surprise those unaware of their first, but it’s their loss; pop music is rarely this immaculate. It’s the baroque elegance of the Blue Nile, Prefab Sprout and London Grammar. They’ve an eye for detail more suited to diamond setters, and tug forgotten heart strings.

Tonight (London's ICA, 18 February) They’re joined by a string section (London Soloists), and the opener, "Worry", like most of tonight’s set, is new. It builds from a disconcertingly low-key start until you’re overwhelmed by a new friend. You want to hear it again before it's even finished. There’s such dense brevity to their arrangements that, even with 12 people on stage, it’s hard to see how they do so much with so little. These songs reach for the sky and return clutching stars. Ella Girardot might have adopted a stage persona from the increasingly discounted shelf offering siren-esque posturing of Florence Welch and Kate Bush, but it feels necessary rather than contrived. If she didn’t sing so astonishingly well it’d be annoying, but instead you barely notice.

They’ve grown ever more ambitious, although the most significant change is the absence of singer/guitarist Orlando Leopard - like Prefab Sprout’s Paddy Macloon, he’s now sadly eschewing live performance for the studio. His gravelly voice is the perfect harmonic foil to Girardot’s soaring vocal, but with so much to love he’s excused. Mind you, with Girardot’s nerves between songs, they’ll be no one on stage at this rate. Perhaps, like Kraftwerk, they intend to send robots to play on their behalf, although they’d never play with this much heart. Thankfully, Leopard also remains as songwriter.

Recent single, "Who Returned" is a mini symphony of paranoia, swooping strings and niggling synth line, hypnotising the room until it's breathless. Funk arrives for the Chic meets Bat for Lashes of "Since We Were Kids". They sing beyond their years, with a precipitous sense of aging, as though on the cusp of an unwanted adulthood. The smoky "Midland", with its defiantly driving and chiming guitar Johnny Marr used to play, casts a sly grin at this marching of time ‘I’ll never move/I’ll never move/I’ll always be so still.’

As another song builds to a gospel-like intensity, they’re swimming deep in shallow waters, or carefully in deep ones. They are tighter than a Swiss watch as the drumming adopts a military tattoo and horns take the lead for "All I Ask". The music frequently sits back to allow a lone a cappella, cow bell, or piano. It’s a shame that jaw dropping makes less noise than clapping.

The ethereal build of hymns lies at the core of Arthur Beatrice’s songs. It’s a wall of sound Phil Spector would love, yet leaves space for hooks, trumpet, and flicked guitar lines. The sprightly single "Real Life "and closer "Every Cell "are the kind of songs married couples fall back in love to. A band has rarely held its crowd so close. It’s as good as music gets. Few established bands are so utterly in command of their sound, much less new ones. If the third album is any more ambitious it’ll be sung backwards in Latin. It’s a shame they still feel like music’s best kept secret.