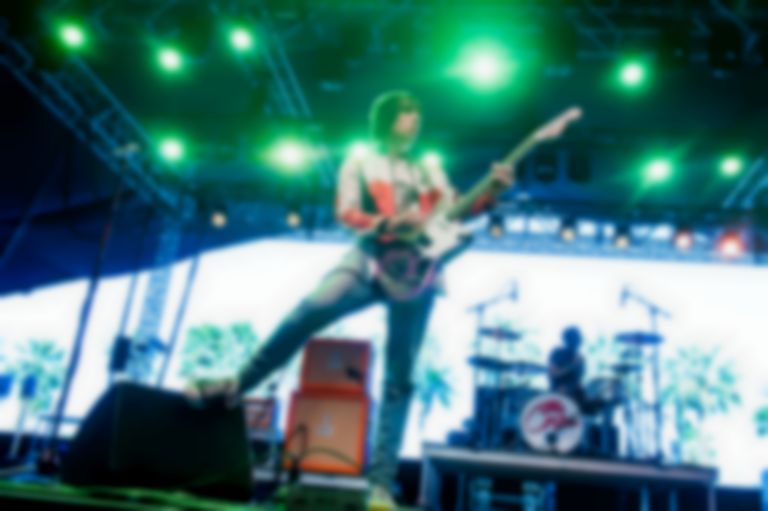 There are plenty of venues in Manchester well-suited to The Cribs, and the Albert Hall, on paper, is not one of them.

The once-forgotten Wesleyan chapel has rapidly assumed the position of Manchester’s premier mid-size room since opening in March of last year, but it’s difficult not to wonder whether the unglamorous sweatbox of the Academy might provide a more fitting environment for the Wakefield trio’s typically furious live show; the balcony in the Hall - studded with stained-glass windows - is seated, which seems like anathema at a Cribs gig, whilst the venue's ground floor - previously home to an Irish chain pub of some notoriety - reopened last week as a swanky bar that hardly screams punk credibility.

The unrelenting level of energy we’ve come to expect from this band was never likely to be lessened once they finally got out in the UK proper March’s For All My Sisters, a Ric Ocasek-produced slice of rough-around-the-edges pop that fizzes with trademark vigour. Much of the press around the record focused on the similarities between it and the group’s breakthrough album, 2007’s Men’s Needs, Women’s Needs, Whatever. The latter was considerably more polished than this year’s effort, but onstage, there’s never been a great deal of sheen to The Cribs; they are jagged, raw and uncompromising.

Accordingly, those two pop albums prove suitable bedfellows and dominate the setlist tonight (21st October); “Different Angle” comes with the kind of frustratingly catchy chorus that sits neatly alongside, say, “Men’s Needs” or “I’m a Realist”, and the rolling guitars of “Pacific Time” or “Finally Free”’s fist-pumping crescendos made dusting off the hooks of the likes of “Women’s Needs” and “Moving Pictures” a no-brainer. Amongst the older cuts included, early single “You Were Always the One” is suffixed - apparently off-the-cuff - with a clever, beat-inspired back-and-forth between twin singers Ryan and Gary Jarman, and the ramshackle charm of “You’re Gonna Lose Us” has is once again making frequent appearances after years of obscurity.

The Cribs have always been loath to indulge in rock star posing and, as usual, there’s no encore tonight; a hidden benefit is that it seems to push them to make sure they leave everything out on the stage by the time they leave. It’s difficult to believe, now, that arguably their most anthemic live singalong, “Be Safe”, was never originally intended for live performance; Lee Ranaldo’s original spoken word backing track is played in the background, which is probably preferable to the man himself joining them and reading it off a sheet of paper in disjointed fashion, as was recently the case in Montreal. Only “Cowlily”, a recent B-side which goes over most of the crowd’s collective head, and the gentle “Shoot the Poets” inspire calm amongst what is, for ninety minutes, a chaotic set torn through at breakneck pace.

Just the one song each from In the Belly of the Brazen Bull - their brilliantly brash 2012 full-length - and Ignore the Ignorant, its 2009 predecessor with Johnny Marr, are aired tonight, which is testament to the strength in depth in the band’s catalogue at this point. They can afford to construct the set as they see fit, and this is an unabashed run through the poppier side of their canon, dominated by Men’s Needs... and For All My Sisters. Their next LP will draw upon heavier tracks either already cut, or scheduled to be, with Steve Albini in Chicago. Thunderous closer “Pink Snow” perhaps hints at where they’re headed, but either way, tonight offers compelling evidence that they can chop and change between pop and punk without compromising any of the incendiary energy that makes their shows so enthralling, so consistently.