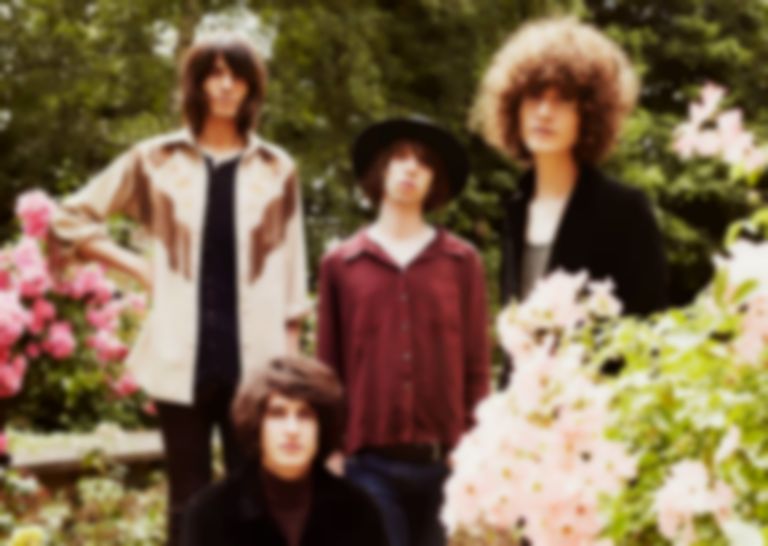 Whisper it, but, there’s a bit of a psychedelic riot going on. Kaleidoscopic guitars, cod-mysticism and incoherent vocals have shot back into vogue courtesy of the likes of Tame Impala, whose acid-washed introspection has positioned them as the modern mothers of invention, begetting artists as vibrant as TOY and Hookworms in much the same way that hundreds of screaming lovechildren must surely have arisen in the aftermath of the Summer of Love’s sexual liberty.

Tonight, it’s Temples, the latest flourishing psychedelic offspring from the fertile ground lain by Kevin Parker and company, that manage to pack out the Birmingham Institute with an eclectic mix of appreciators. From teenage fan-girls to pretentious pulse-fondlers right through to some of the aforementioned hippies who appear to have successfully weathered their parental duties, it’s a capacity crowd ready to worship at the winkle-pickered feet of this nascent band.

Temples appear on stage without much fuss or rigmarole, looking like the raiders of an Oxfam positioned somewhere in the vicinity of Woodstock and appearing resplendent in their retro finery; outfits as indebted to their heroes as their music, complete with flares, necklaces and sparkly socks. They launch into early single “Colours to Life” after an understated greeting, seamlessly weaving technicolour riffs together with hypnotic, aching vocals; a woozy marriage that envelops the expectant room in its alien sound before unfurling the whimsical organ-driven album title track “Sun Structures” and soothing hand-clap led freak-out, “A Question Isn’t Answered”.

Said debut release (most of which is given an airing) has been widely hailed as one of the standout records of the year, and on hearing many of these hallucinogenic cuts live, it’s hard to disagree with this assessment. Sure, for the majority of their stage time, Temples don’t so much rip up the rock rule book as howl passages from it verbatim and leaf through its well-thumbed chapters before tearing out specific pages, but, it’s on these scraps of torn-out paper that they write succeed in writing accomplished sonic love letters to some of the finest names in the counter-culture canon.

And though it might seem that most of the night’s rollicking tracks (the trippy Byrds-y blast of “Shelter Song”, the transcendental aesthetic of “The Golden Throne”) are mailed to the far reaches of the exotic American West Coast from this cramped and sweaty city venue, the band make time to acknowledge the British enigmatic tradition. The glam stomp of “Keep in the Dark” sees James Bagshaw bashfully impersonate the flamboyant sparkle of fellow curly-haired wonder, Marc Bolan, against a rocking T-Rex backbone whilst the infectious “Move with the Season” transports us into Floydian territory despite the song’s lyrics lacking Syd Barrett’s decidedly Carrollian persuasion.

It’s a testament to the quality of their songs that the performance feels painfully short, their limited oeuvre only taking the baying crowd on a limited trip into their eccentric, lucid world and even the encore, a triumphant and clattering run-through of “Mesmerise” is complimented not by another song but by an extended interstellar jam. Nevertheless, this gig shows another colourful string to the band’s already vibrant bow. It might be the year of Sun Structures, but tonight, acid reigns.