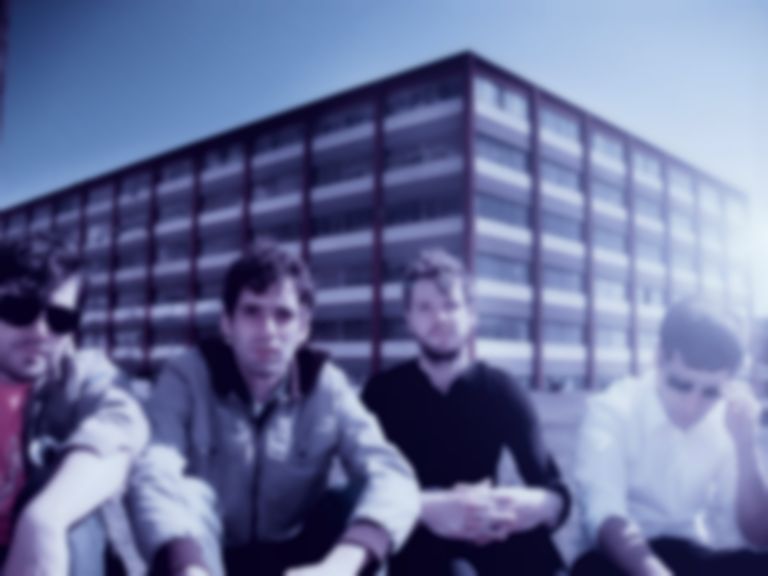 Every time I see Suuns (and that’s a lot), they always fool me into thinking something has gone utterly, drastically wrong.

Their scorching and searing feedback goes way beyond any ambient backdrop of noise. There must be a fault. An explosive, rupturing bang – loud enough to puncture something – can only be the sound of an amp blowing, surely. But it’s always deliberate. Eerie grooves and looping, repetitive licks emerge from the chaos. Delivering an absolute masterclass of poise and precision, Suuns are always in full control.

Suuns have always been a committed touring act, and the time they spend playing these songs on the road has allowed them to loosen the tight frameworks of these songs; giving the an impression of fluidity to their work, whilst working with lazer sharp precision. A great example of this is "Powers Of Ten". On record, as an opener for their second LP, it’s a straightforward, chugging buzz saw of noise. Tonight, it’s a murky and unknowable beast.

The first verse is played at a shifting tempo, around half speed, groaning with anxiety and despair. The vocals – already fragmented and chopped up on the studio version – are barely recognisable as language, falling apart in the face of the contemporary collapse which they capture. (An interpretation of the opening lines: “Got it together? I’m reading the paper. All of these strangers, get stranger and stranger”).

Touring has also given them the ability to turn a live show into part of their craft. During "Resistance" – a song pregnant with more silence than noise anyway – the band fall into a sustained, total hush. They let the cheers build slightly. Then they fall away. Then a smattering of heckles rise up. Then they fall away. And only then, once a faintly awkward silence is restored, do Suuns lurch back into sound. This is a great example of their increasingly keen instinct for build, release and – most importantly of all – anti-climax. They’ve shaped this over the course of three incredible albums, and now they even incorporate it through the incidental sounds of a live audience.

All of this is emboldened by the fact that the sound in Rich Mix tonight (26 October) is absolutely exquisite. Firstly, it’s fucking loud. Bludgeoned by colourful lights that manage somehow to be sinister, the room becomes a hot crucible of noise, turning frequent moments of bliss into borderline transcendental experiences. And for a band which plays with the precision of Suuns, this clarity in the mix is crucial. The snares go off like gunshots. The synths entwine the guitar lines beautifully. The cleaner riffs stand starkly against a canvas of ambience awash with abrasive noise. The level of detail you can extract from the sound is incredible, allowing you to descend further into the soundscape.

I have seen Suuns three times this year now, and many times before, but I cannot write enough good things about them. For me, they’re one of our finest – and certainly one of our most criminally underrated – touring acts, evoking the panics and the pleasure of 21st century existence with an unsettling beauty. Not only that, but tonight may well have been the finest performance I have ever seen from them, suggesting that they’re even still on their upward curve. Between the poles of minimalism and maximalism, Suuns are making some of the most oddly affecting music of the decade.