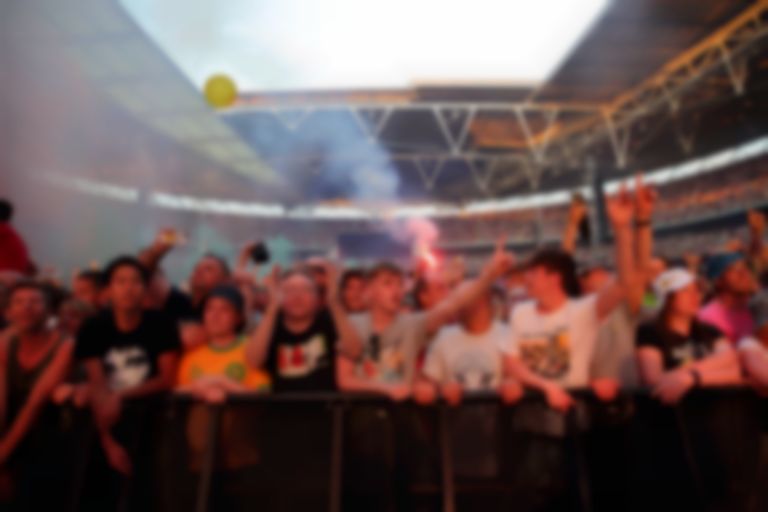 The song that is played before The Stone Roses take the stage tonight, The Supremes’ “Stoned Love”, contains a line that sums up the evening: “A love for each other will bring fighting to an end.”

Tonight, at a sun-drenched Wembley Stadium, love is in the air; between the four players onstage, their glorious songs and the audience. But tonight is more than simply a love-in. Through the timelessnesss of their back catalogue, The Stone Roses proved they still matter as a musical force.

We’re still waiting on meaningful new material; last year's “All For One” and “Beautiful Thing” sounded like them dipping their toes into musical waters rather than swimming to the front of the crowd, but their next musical step is a subject of conversation for another time. It’s been a circuitous road to get to this part of their story. In the 90s their thunder was stolen by Oasis, who in contrast to The Stone Roses, possessed a prodigious work ethic, even if they weren’t anywhere close to the Roses in terms of talent. As Oasis toured and recorded relentlessly, The Stone Roses took an age to make their second record, Second Coming, that ended with an acrimonious parting of the ways.

Tonight acrimony is the last word that comes to mind. Walking up Wembley Way, the first thing you notice is a pan-generational collective, including parents taking their children and curious adolescents wanting to see what the fuss is all about. The walk to the stadium sees anthems from the indie-dance pantheon blared from the food stalls, but the songs that boom from the stadium PA before the band arrive onstage, including Future Sound of London’s “Papua New Guinea", Inner City’s “Good Life” and the aforementioned “Stoned Love” are far more pertinent to The Stone Roses' narrative of marrying guitars, melodies and dance music to transformative effect.

As Reni, Mani, John Squire and Ian Brown saunter onstage - the latter looking like he’s drinking a cup of tea rather than worrying about playing a voluminous stadium – and ease into The Stone Roses' “I Wanna Be Adored”, it prompts a joyous outburst of dancing from the audience. There’s a whiff of nostalgia in the air, as well the smell of flares (not of the 22-inch variety), but the song, playing and the delivery sounds vital and crisp. Even Brown’s much-derided vocals are bang on the money.

There’s minimal chatter from Brown as they power through the nineteen-song set. “Elephant Stone” sees Squire put his first step on the wah-wah pedal, and his combination of melody and funk is a reminder of how ground-breaking they were and part of the reason that these songs still sound so pristine. Brown is still a frontman to be reckoned with, but the musicianship of the players is a marvel. They stretch out “Fools Gold” wonderfully, as Mani and Reni hold and expand the rhythm whilst Squire revels as a renascent guitar hero. playing the most unmacho of guitar lines despite his frequent classic rock posturing. “Waterfall” segues into its backwards version, “Don’t Stop”, and somehow it actually sounds like they’re playing it in reverse. I doubt Wembley Stadium has witnessed anything as psychedelic in its history.

During a celebratory “Made of Stone”, with the stadium lit up with white lights for the chorus, the sense of community and joy is contagious; even more so on “This is the One”, where despite Brown’s singing wobbling noticeably, the euphoria of the tune and atmosphere it impresses upon us sweeps the stadium off its feet. The closing “I am the Resurrection” starts with Reni knocking out a playful drum solo before locking into that snare and bass drum groove before being joined by the synchronised bass and guitar riffs. As it builds to the coda, with Brown chpping in on percussion, they nail the false stop in the middle, before winding it down, embracing each other and waving their goodbyes.

Tonight was an exhibition of friendship and love; even on the way out, members of the audience make the thirty minute wait to get on the tube not only bearable, but fun, as they continue to sing and rejoice at what they’d just witnessed. Who knows, perhaps this most unpredictable of bands will release an album that will knock everyone’s socks off; for now, however, love brings fighting to an end, which after the week London has had, is more important than ever.

Setlist:
I Wanna Be Adored
Elephant Stone
Sally Cinnamon
Mersey Paradise
(Song for My) Sugar Spun Sister
Where Angels Play
Shoot You Down
Waterfall
Don't Stop
Begging You
Elizabeth My Dear
Fools Gold
All for One
Love Spreads
Made of Stone
She Bangs The Drums
Breaking Into Heaven
This Is the One
I Am The Resurrection