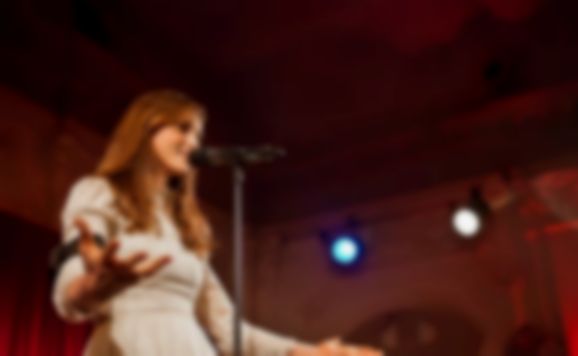 The choice of venue is a statement of intent in itself. Tonight’s show at Union Chapel – seated and reverent – isn’t a going to be a night of four-to-the-floor disco music and smooth club numbers for which Sophie Ellis-Bextor is primarily known. Tonight is a showcase of the lurch towards chamber-pop and weepy balladry marked by her latest album Wanderlust, and it does a great job of justifying her change in tack.

Cynics may smell a rat. Following ten years with a major label, each release marking more and more distance from her chart topping heyday, Wanderlust is the first album to be released independently, and was entirely self-funded. For a lot of artists in this situation, this can be a step down the path of deluded vanity; eager to prove an artistry which had been allegedly stifled by the suits. At first glance, it’s easy to have the same fears about Bextor, but tonight’s set amplifies existing strengths alongside solid song writing, and curtails these anxieties.

Something Bextor never got nearly enough credit for is the character of her voice. She was frequently unfairly maligned for a perceived lack of personality and humour back when she was in the bona fide limelight, and this reputation has helped to mask the strength of her voice. Although calm and poised, it’s a gorgeous thing – not only a crystalline singer, but a frequently emotive one too. Tonight’s material helps bring this to the fore, allowing her melodies to become central to the performance, rather than the rhythms.

Songs like “Runaway Dreamer” present us with completely new textures, while retaining the dreamy, sixties hooks which Bextor has always been so expert at stringing together.

But of course, she was never going to get away with playing any of the favourites, and the old material sat alongside the new in the most satisfying way possible: by keeping them entirely separate. The first half of the performance gave the new album fair shake, playing the vast majority of it in sequence, building its success through its uninterrupted mood. The back-end of the set shifted gears, thoroughly devoting itself to dance.

Following a quick costume change, Bextor re-entered the stage to a live but essentially untouched version of “Take Me Home”. From here onwards Bextor, was a performer devoted to Friday-night populism, leading room-wide nostalgia appreciation with covers of Moloko’s “Sing It Back” and Modjo’s ‘Lady’ alongside her own big numbers like “If This Ain’t Love” and “Murder On The Dancefloor”. It was expertly judged, deliciously delivered, and an unabashed joy in contrast to the seriousness of her new material.

Sophie leaves us with one final encore, killing all the house lights, and performing with just acoustic guitar accompaniment for an even more stripped back version of Wanderlust cut “Interlude”. Not only does this re-establish the capacity of her voice to carry a song without groove, it also perfectly completes the bridge between where she once was, and where she wants to be. It’s a difficult line to walk successfully – much less while delivering a genuinely satisfying show, which she does – but tonight’s set suggests that Wanderlust isn’t the vanity project it might first appear to be, but the first step down a fruitful path for Sophie Ellis-Bextor.

Photos by Anthony Keiler taken from the Bush Hall in January 2014. See the full gallery here.