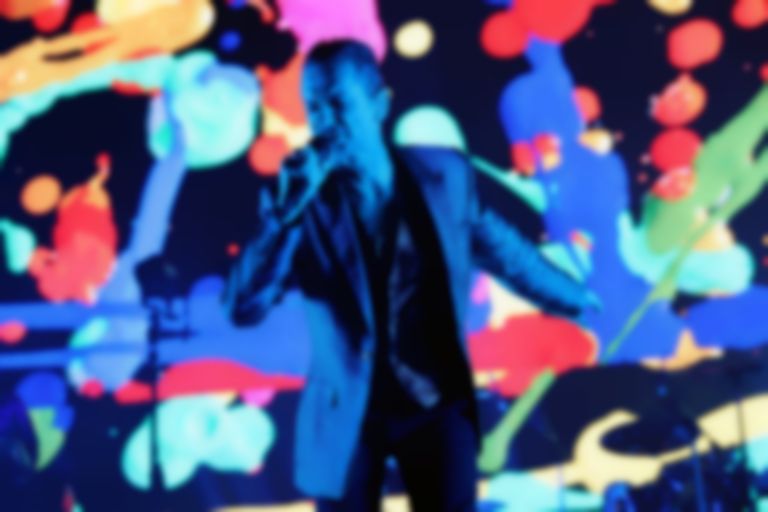 The challenge of playing an arena or a stadium is balancing communal experience with the delicate intimacy that is traditionally afforded to theatre or club concerts. At the O2 Arena, Depeche Mode somewhat captured that intimacy, but also demonstrated its brittle nature in the arena setting.

Invoking a communal atmosphere should not be difficult for an experienced, world-conquering act of Depeche Mode’s calibre. And over the course of their two hour set, the Basildon three-piece (expanded to a live five-piece) provided a plethora of euphoric and well-constructed sing-a-longs, clap-a-longs and wave-a-longs (during the epic and excellent “Never Let Me Down Again”), thus lavishing the audience with an abundance of grand, communal experiences. “Home” however provided a genuinely moving moment of collective adoration and appreciation, as an audience-led mirroring of the song’s coda bellowed around the walls of the arena.

Resembling a cult figurehead, Dave Gahan expertly led the amassed members of his devoted following, as he restlessly sashayed, danced and spun across the stage. He exuded charisma, as his idiosyncratic baritone vocals charmed the masses. After years of touring though, it is evident that whilst exuberant in nature, Gahan’s performance is now comprised of set, professional patterns of moves, purposefully utilised to delight and work the crowd.

Consummate professionalism and showmanship aside, the band’s real wizardry was the level of intimacy they conjured at points, even within the cavernous setting of the O2 Arena. Amidst dry ice and (predominantly compressed) clever staging, an early combination of the seedy, hypnotic grooves of Ultra’s “Barrel of a Gun” and “It’s No Good” cast a spell upon the audience, transfixing them and transporting their psyches away from the cavern that surrounded them, to an intimate, smokey and strobe-lit club.

“It’s No Good”, in particular, with its shapeshifting bassline was saturated with forceful sonic bite and characterised the vigour with which the band subsequently played with for the majority of their twenty-song set. Similarly, “A Pain That I’m Used To”’s insistent stomp and “A Question of Time”’s over-driven guitars highlighted Depeche Mode’s heavier side.

The aforementioned spell of intimacy, worked its magic during a breathtaking opening segment, which included Playing The Angel’s “Precious”, Ultra’s “Useless” and the rousing, stadium-sized cosmic waltz, “Cover Me” from 2017’s Spirit. This spell though was so cruelly broken with an ill-judged and self-indulgent, piano-led rendition of “Insight”. “Insight” was the veritable party killer. With the illusion of intimacy dissolved, the arena’s true nature re-emerged and the audience appeared visibly restless. It is ironic that the band seemingly lack insight into the track’s damaging nature to the momentum of the set.

Furthermore, “Insight” pertinently illuminated the friable nature of intimacy within any arena setting. During the highs of the orchestral “Home” or the industrial rhythms of “Everything Counts”, the surrounding audience subtly (and metaphorically) disappeared, as one became increasingly mesmerised by either the sounds on display or Gahan’s charisma. Yet during the languid “Going Backwards” or a flat “Where’s the Revolution”, the arena’s sheer presence magnified any indifference and acted as a black hole of atmosphere.

The presence of the stripped, Martin L. Gore-led “Insight” and “Strangelove”, also raised problematic questions regarding the apparent stagnation in Depeche Mode’s live career. This structure, by which Gore breaks the full-band’s momentum, has been present now for multiple tours. Coupled with further visuals from long-time collaborator Anton Corbijn, the manner by which Depeche Mode present their music in the live setting could be argued as now bordering on stale.

Depeche Mode are unquestionably legends and pioneers. The ecstasy on display as a result of their most seminal hits - “Stripped”, “Enjoy The Silence”, “Never Let Me Down Again” and “Personal Jesus” - was evidence of their status within the pantheon of electronic music. Nevertheless, as ideas are seemingly recycled tour-after-tour (particularly with the misjudged solo forays), one cannot help but ask at this moment, “where’s the revolution?”.