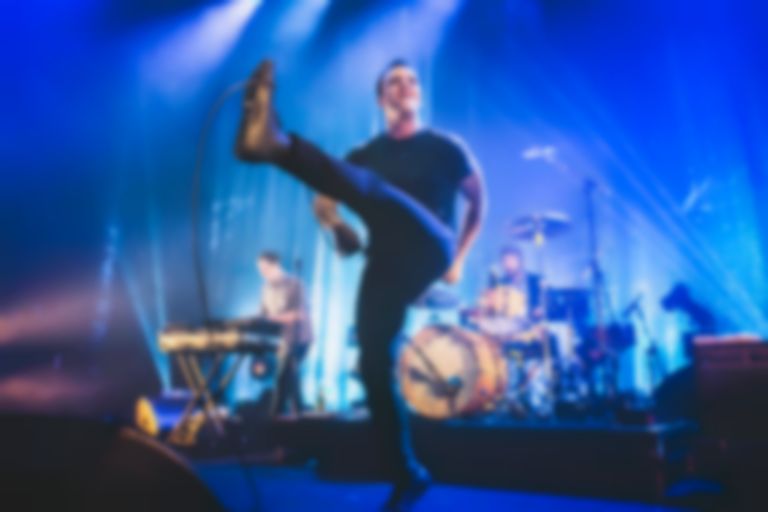 “Extraordinary showmen”, “a stellar show”, “mesmerising” – the reviews of Future Islands live are gushing. Compliments dolloped on top of flattery like sugar sprinkles onto ice cream at a child’s party. Tonight is my first taste.

Over the past 12 months, frontman Samuel T Herring has propelled his three-piece synthpop outfit to headline slots at events across the globe, garnering them a huge and reverent fan base. That Letterman appearance saw the birth of a musical messiah.

With it began a gig schedule so hectic Herring announced at the end of last year that the exhaustion had nearly killed him - he had to be revived by medics after collapsing on the way to a festival in Barcelona. He thought the gig would be his last. So did he seek medical advice and rest up? Did he heck! Instead, he says, “I went as hard I could!”.

The energy of the Baltimore frontman is endless. A Duracell bunny at a rave in a Red Bull factory would tire quicker than this 30-year-old.  He swerves from dapper, debonair king of swing to a demon possessed WWE fighter hawking up phlegm. He is dressed in his trademark tight black tee, black jeans and lace up plimsols. Although I certainly wouldn’t kick him out of bed, it looks like the tours are taking their toll. His stocky frame is softened by a plump paunch, and his rugged face by a receding hairline.

But it’s still a face so captivating, one that transforms and metamorphoses as every essence of emotion is eked upon it. You feel each heartbeat. Every word is an emotional pinprick. I know every note of “Seasons (Waiting On You)”. The lyrics are poignant, poetical and precise. Tonight, the performance is visceral. He feels it, I feel it.

With bassist William Cashion and Gerrit Welmers on keys, they play all but one from the most recent album Singles during an epic 17-track set. This pleases me; it’s these tracks that I have played excessively over the past few months, and I have an almost creepy familiarity with them. This is what I came to hear.

Some oldies get an airing too. “Balance”, from their 2011 album, is an ostentatious ballad with angular driving guitars and throaty vocals that reveals itself an early foray into their current sound.  Even earlier track “Long Flight” is simple and subtle in its layering, yet still with an ethereal rockabilly feel.

They also air new track “The Chase”. It mirrors “Seasons” – anthemic power pop that heaves with 80s nostalgia. With shimmering rising synths and gravelly melancholic vocals, it’s a sound they’ve absolutely nailed, and are taking to an iconic status.

Throughout, the rapture from his audience is one of hypomania - a level of adoration more commonplace at a 1D concert. Quips were met with woops of glea and hands waved in the air desperate for a high five – of which there were many granted.

Despite being given a relatively early heads up on the band by a friend with not so much a finger on the musical pulse as a stethoscope, I had never seen them do a gig. With their numbers of live appearances now clocking up four figures, I had the alienating feeling of being the last muso in London to pop my Future Islands cherry.

So I was very excited. And a little too eager. And far too drunk than one should ever be on a Monday night, an evening usually reserved for lettuce and yoga. But suitably rowdy and excessively giddy, I ticked all the boxes for joining a moshpit gaggle at the Roundhouse.

Meanwhile, I’m reminded that I am not the only one taking things a step too far. “I just fucking split my pants” shouts Herring, to a raucous response. Though no-one is surprised – he seems to have been auditioning as a magician’s contortionist all night.

You have to wonder: How long can he keep this up?  A burn out seems inevitable. Yet just yesterday it was widely and excitedly reported that the band are recording at Abbey Road, so there is surely much more of this frenzy to come.  But just in case Herring does keel over dead mid high kick, I would try and catch them as soon as you can.