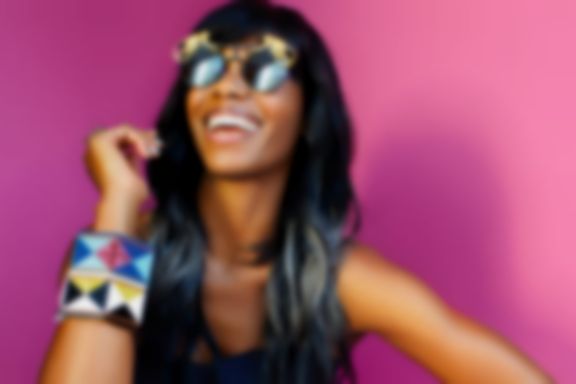 The 100 club is hot. Very hot. August is not the time for basement gigs crammed with excitable ballot winners and liggers, you just get hot. When there is a series of shows as spectacular as Converse’s Represent series, however, you endure the sweat, well because acts like Santigold are on offer and she, my friends, is cool.

Her exquisite proto-hip hip is being supported by the likes of Friends, Citizens!, Django Django and Best Coast, whose appearance on the line-up is less triumphant in reality. Two years ago they could have out alt-ed Savages in the alt-lympics. Now they are merely the house band at a My So Called Life reunion, booked by a 33-year-old Brian Krakow cos they sound like something Angela might have gone to see with Rayanne in an act of teen rebellion.

Santigold, however, is still cool. She wears sunglasses indoors and is flanked by dancers as regimented as Public Enemy’s S1W. Opening track ‘Go’, with its serotonin vibrancy, shudders with crowd surging rhythms counterpointed by the dancers’ deadpan moves. Performance is key to Sanitgold’s act, and her penchant for the dramatic peaks as she is draped in a spangly gold cape and pulled around the stage while still singing.

She is playing to a backing-track, pointlessly manned by a man with a goldie looking chain. At Wireless festival she oozed spellbinding magic with a three man band and even a Pantomime horse. Tonight that sparkle has gone so these little visual aspects are paramount, otherwise the stage would be lacking.

‘L.E.S Artistes’ and ‘The Keeper’ although bludgeoning with style lack any vigour, and while an invited stage invasion for ‘Creator’ butters up the crowd for a cover ‘Hold The Line’ the realisation that her beats aren’t strong enough has set in.

‘Disparate Youth’, however, is another matter entirely. It is blissfully wonderful, majestic in its relentless simplicity. Her dancers move with ballet serenity and Santigold’s voice is jawdropping; her laser eyes piercing the awestruck audience.

Although the bass finally kicks in for ‘Freak Like Me’ and ‘Big Mouth.’ It is clear much of the audience has already left, let down by the run of the mill nature of tonight’s show.