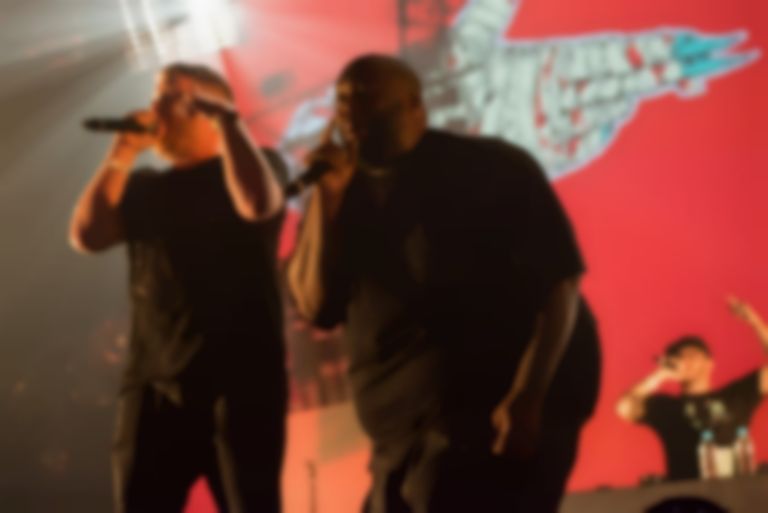 The last time Killer Mike and El-P played in Manchester, in the thick of a European tour in December of last year, they were only just getting their heads around what Run The Jewels was actually becoming.

Initially, when they’d begun touring in support of their first, self-titled album, they played three sets - Mike would play thirty minutes of his own material, El would follow suit, and then they’d team up for a third half-hour of collaborative tracks.

That December jaunt was the first one on which they ditched that format, and instead made it all about Run the Jewels and last October’s follow-up. They did so after realising that the crowds were responding well to Mike’s slot, and then to El’s, but when they came back out together, all hell was breaking loose. As if to reinforce the fact that they were still feeling their way into playing live as a duo, the tickets and posters still sold the gigs as “Killer Mike + El-P = Run The Jewels”, a detail that already seemed a little quaint then, with critical rave reviews for RTJ2 and a flurry of incisive political commentary from Mike on the events in Ferguson, Missouri bringing the pair to a much wider audience than they’d ever reached in their own right.

A year on, the idea that you might need to explain who Run the Jewels are to shift tickets seems faintly ridiculous, and so does the notion that they once felt uncertain about making their gigs all about their double act. They have toured ferociously throughout 2015, razing festivals to the ground on both sides of the Atlantic and covering North America twice. Tonight (30th October), the penultimate European show for RTJ2, it’s clear that repetition has bred mastery.

It’s tricky to envision an environment in town better suited to this kind of show than the Warehouse Project’s spiritual home of Store Street, at the beating heart of the city beneath Piccadilly Station; after an ill-fated three-year excursion to Salford (bigger in size but a downgrade in every other regard), the superclub has returned to the place that made it, even if only temporarily whilst plans to move around the corner to the disused Mayfield Depot stall. Midnight under the arches fits Run the Jewels down the ground - especially when the room is as unremittingly sweaty as it is tonight.

The pair are about to head into the studio to cut Run the Jewels 3, and they emerge at the Warehouse with an urgency that suggests the fact that they’ll be away from the stage for a while has only just hit them. Emerging to the triumphant strains of Queen’s “We Are the Champions”, El-P in particular is on explosively energetic form on opener “Run the Jewels”, and the pace never really dips from there on in. “Oh My Darling Don’t Cry” is carried off with crackle and vigour, and the reaction of the crowd to the squelching bass of “Blockbuster Night Pt. 1” is one in a series of pieces of compelling evidence that El-P’s beats on these two records are becoming as iconic with the fans as the verses themselves.

Most impressive, though, is the manner in which the two men seem to have forged such a close personal and working relationship. More so than twelve months ago, there’s real dexterity to the way their rhymes meld in and out of each other, especially on the ominous “Lie, Cheat, Steal” and the raucous “Close Your Eyes (And Count to Fuck)”. More compelling than that, though, is how obviously these guys love being in each other’s company. Their friendship seems to be at the core not only of how smoothly their recorded collaborations come off, but the sheer energy with which they deliver their live shows, too.