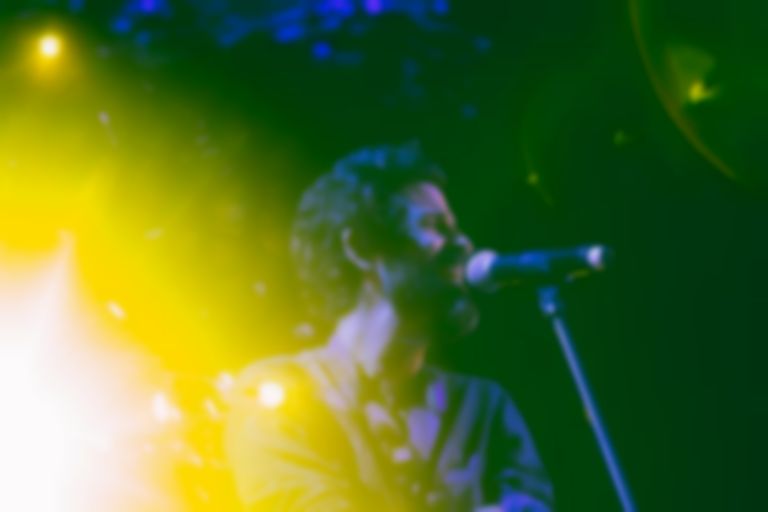 There has always been an element of collaborative celebration to Devendra Banhart's output.

Despite the fact that he operates as a solo artist and many of his past shows have been low key affairs consisting of him and a well worn guitar, the way in which he manifests positivity in his music is something that has always felt entirely inclusive. And tonight's show at London's historic Hackney Empire was no exception.

Before Banhart took to the stage, recent Heavenly Records signing H. Hawkline provided some enchanting support. His lilting falsetto and energetic guitar work kept the crowd enlivened as he ran through a set largely comrpised of tracks from his new album I Romanticise. Unassuming charm abounded.

But the sold-out crowd erupted as Banhart casually slid on stage, resplendent in a crisp white shirt and grinning a with an impish glow. With a full band (including H. Hawkline on keyboard duties), Banhart eased himself in with an understated version of "Saturday Night" closely followed by "Für Hildegard von Bingen" dedicated to the German mystic who stands as its namesake.

When listening to Banhart's music it's easy to forget just how much of an entertainer he is. He seems just as comfortable throwing out mid-set zingers and jokes as he was delivering softly-spoken, heartfelt torch songs.

Most of tonight's set was taken from Banhart's recent record Ape In Pink Marble, but he also worked in a smattering of classics. A solo rendition of "Never Seen Such Good Things" and "Long Haired Child" proved that he can be just as effective when delivering a stripped down performance as he can be with a fully fledged band in tow. A surprising highlight was "Fancy Man", which to these ears is one of the least inspiring moments on Ape... but here, its slick bossanova rhythm whipped up a mini dance party in the crowd, a testament to the importance of placing a song carefully within the arc of a live set.

The inevitable encore ensued and what followed was probably the most engaging part of the night. Banhart had truly found his comfort zone as he tore through the roaring Latino groove of "Carmensita", as well as providing a poignant and considered version of Bowie's classic "Sound And Vision". Having been in the game for nearly two decades, tonight Banhart proved that he's still capable of transporting a crowd into his weird and wonderful plain of existence.