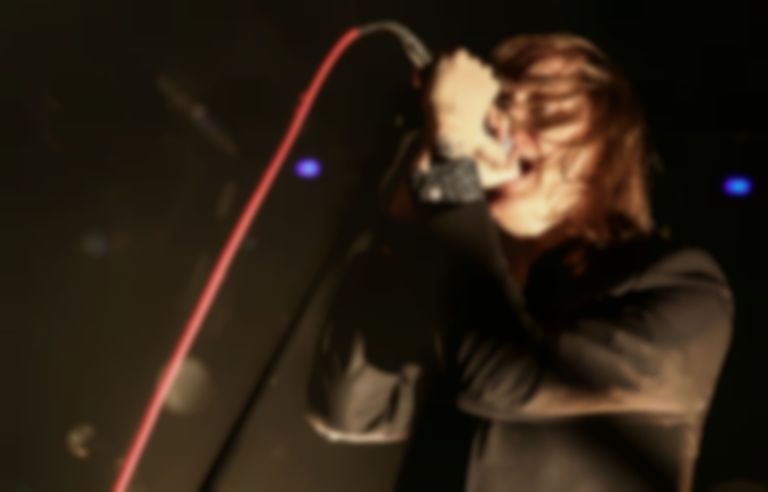 Near the tail end of Refused's Good Friday performance, we're informed by singer Dennis Lyxzen that the band only had two ambitions when five staunchly idealistic left-wing teenage punks formed in the tiny Swedish town of Umeå in 1991; one was to play outside of their home town, the other to release a 7" record. After 25 years that included a lengthy hiatus, only one of those have so far been accomplished; those gathered within the walls of the seaside facing Concorde 2 in Brighton and many thousands worldwide will be glad it was the former.

With Britain under a mid-Nineties fascination with Britpop, that which fell culturally outside of such narrow parameters was often ignored by a music press obsessed with tunes played by those in Parkas with Union Jack emblazoned guitars rather than the politically charged punk rock contained on Refuseds Songs To Fan The Flame Of Discontent.

The influence of their third studio album, '98's The Shape Of Punk To Come, can be heard in countless bands that have followed within the hardcore and punk scenes. An ignominious halt arrived near the curtain end of that year in front of fifty kids at a basement show in a Virginia college town, but it was a passing that helped ensure Refused were revered by those who had become aware of them,and those who would later.

Their reformation could have been a damp squib.  After a lengthy tour of high energy shows, there was still trepidation around the release of their fourth album Freedom last year, particularly as a reunion had always seemed highly unlikely. But like At The Drive-In - whose adventure initially came to a swift end after finding themselves on the cusp of breaking through into the mainstreams consciousness - the hiatus breathed fresh life into Refused's existence, allowing their influence to spread, and more importantly, people to catch up.

When they explode into life at the beginning of tonight's performance, after what feels like twenty minutes of intro music that seems to consist of nothing more than a droning note soundtracking the audience's many conversations, we know instantly what we're in for. Opener "Elektra", from their most recent album, may have a classic rock swagger lurking beneath its high intensity and hard rocking metallic riffs, but tonight's show is a 17 song, vibrant burst of muscular post hardcore and punk inspired political rebellion.

Frontman Dennis Lyxzen is a punk rock version of Mick Jagger - a natural entertainer and master of showmanship but with added realness and authenticity. Whether engaging in microphone tricks or walking out and onto the audience's outstretched hands, he is the conductor leading both band and audience. Rebellious in nature, Refused have always encapsulated a generation’s rebellion against commercialism and capitalism, so it's little surprise that his between-song speeches cover everything from the refugee crisis to being an outsider and even slight jibes at the venue for an early Friday night curfew time.

That reunion shows have the function of giving one half of the audience to temporarily feel like they’ve been transported back to a previous time, whilst giving others the chance to finally see that band they had only experienced via old recordings. Collections of people near the front of the stage, with faces painted with large smiles and sweat covered bodies, are involved in a neverending bout of moshing, while songs such as "Rather Be Dead" with its weighty riffs, the anthemic, screamo-tinged "New Noise" or the pummelled rhythms and taut riffs of "Dawkins Christ" soundtrack the synchronised commotion.

Refused's quest is as important today as it has always been. Their reformation is a second chance to help change the world; an opportunity they're will grab firmly with both hands.