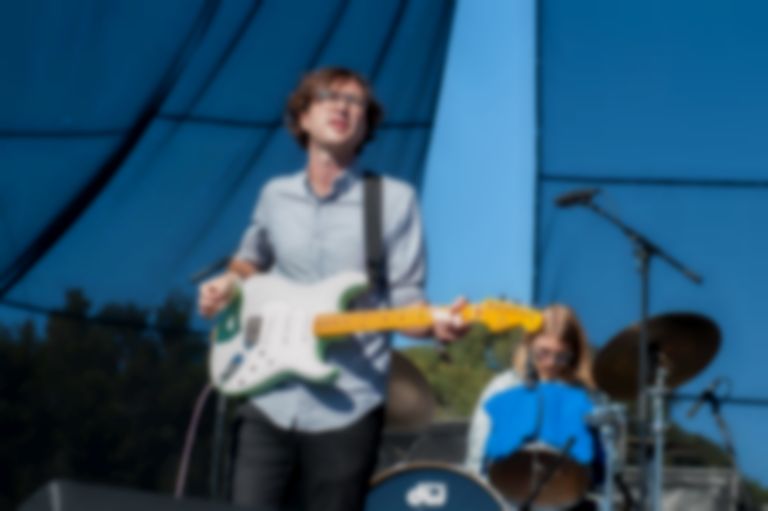 On a crisp autumn evening in West London, New Jersey five-piece Real Estate do a marvellous job of warding away the chills with their own brand of sun-kissed West Coast rock and roll. Despite a set that leans heavily on latest LP Atlas, there’s enough of a sense of cosy familiarity to keep a packed Shepherds Bush Empire toasty with soft-focus dreamscapes of cloudless skies and Californian vistas.

More’s the surprise that the fivesome at times look and sound a bit like rainswept Madchester exports the Stone Roses, what with baggy shirts billowing around front man Martin Courtney and the rest of the group as they open with a vibrant version of "Had to Hear". Of course, anybody familiar with Real Estate will know their oeuvre cleaves closest to ‘60s folk and acid rock along with any number of ‘70s FM radio mainstays (as though to emphasise the point, bassist Alex Beeker nonchalantly plucks Grateful Dead licks between songs).

Still, compared to how they usually come across on record there’s definitely a more spacious and atmospheric aesthetic here that harkens back to the Roses in their jangle pop pomp. Second track "Crime" carries a certain mid-tempo swagger leading into its singalong chorus, "Green Aisles" from breakthrough second LP Days benefits from judiciously liberal application of flanging effects and recent album cut "The Bend" sounds unexpectedly bombastic. Even lo-fi surf effort "Fake Blues" from the self-titled debut takes on a much more muscular stature.

The Domino signees’ sound is also leavened in no small part by new keyboardist Matt Kallman, who replaced Jonah Maurer midway through the Atlas sessions. His greater presence livens up the new material but also lends some older numbers a layer of real textual complexity. Such is Kallman’s impact, in fact, that the extended instrumental coda of Days closer "All the Same" becomes the highlight of the show.

If there are any quibbles with tonight’s performance, they’re minor. The lack of any proper audience interplay throughout most of the night is a shame; Courtney instead showering the crowd with an assortment of hackneyed blandishments (though getting the house to raise the lights at one point is a nice touch). Proceedings also threaten to run out of steam mid-way through with the ill-advised inclusion of Beeker’s narcoleptic filler "How Might I Live".

No matter. By the time we hit signature tune "It’s Real" the audience are back in full voice, some of them clearly having waited all night just to clap along and give a karaoke rendition of its “whoa-oh-whoa” refrain. Later during the encore, a 20 year-old roadie emerges on stage as Kallman and drummer Etienne Pierre Duguay switch places and the band lead all and sundry into a rousing performance of "Happy Birthday" before closing with feel-good instrumental "Kinder Blumen". It’s just the sort of finish to warm everybody's hearts as they head back out into the brisk air of the night.