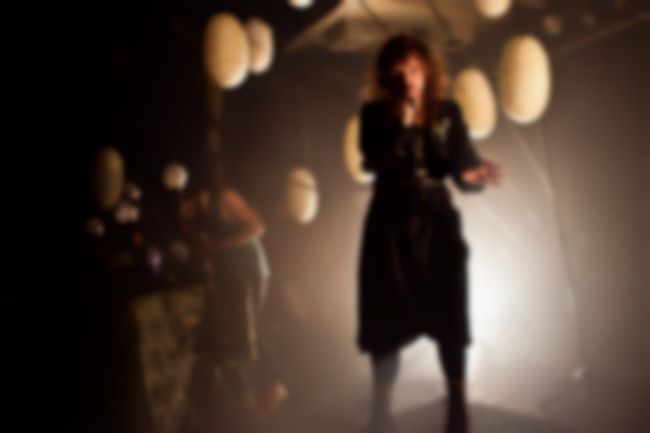 A slightly crumpled, skew-wiff sheet of paper is blu-tacked to the wall in The Scala’s foyer. It reads ‘Sold Out’. Tonight plays host to Purity Ring, and so the packed venue indicated by the sign is more or less a given.

Shrines was one of the most hotly anticipated debuts of the year, and it went on to completely surpass all expectations. Claustrophobic, dark and teetering between fear and unhinged delight it seemed to arrive at the perfect moment. Given a massive leg-up by the popularity of Grimes, Purity Ring lead the new movement – combining the paranoia of witchhouse with a far more palatable pop-tinged sensibility. In other words, they should have made a sturdier ‘Sold Out’ sign; we bet they’ll have to stick it up on every date of Purity Ring’s tour.

Purity Ring are absolutely haunting from the very beginning. “Grandma, I’ve been unruly… drill little holes into my eyelids” lulls Megan James, as she sways across the stage in a dress with a definite air of Kate Bush about it. James drills her killer heels into the stage floor with a sort of nonchalant violence as she sings – at other times she lingers around the drum wielding a stick and a sort of railway light contraption that casts eerie shadows across her face. It’s mesmerising and unsettling at the same time. One minute James will be doubled over the floor nodding her head in half-time and swigging from a whiskey bottle, the next she will be centimeters from the front row, singing the likes of ‘Obedear’ straight to them.

Corin Roddick’s innovative production formed the basis for Shrines and he has brought an ingenious contraption to the stage too. Evolving from the array of copper piping Roddick used early in Purity Ring’s live shows, his latest immense tangle of synthesisers and drum machines dominate Scala’s modestly proportioned stage. Riddled with a xylophone of light up gems, it’s absolutely fascinating. The patience, the creativity that must have gone into programming such a unique piece of equipment is remarkable, and beyond our comprehension. We haven’t the foggiest how it works – but one thing is for sure, this is no ‘edgy acoustic act’ on the X-factor with an unplugged guitar. Roddick’s set up is genuine, and the incredible sound manipulation is all being done in real-time to match.

It’s these microscopic details that draw you into Purity Ring’s weird world, where electronica and sub-bass orbit infectious melodies in a winding mist. Admittedly James’ voice isn’t as strong live as it is on record, when she whacks the living hell out of the bass drum in front of her, she isn’t always in time. It begs the question, though, who actually gives a hoot? When Megan James thumps that drum, it’s like she’s reliving all those raw stream-of-consciousness diary admissions that provided the beautifully twisted basis of Shrines. When she floats slowly around the stage it’s like she embodies the veering instability of ir. Purity Ring are captivating live, because they have the rare ability to gift electronic music with a beating heart and a soul.