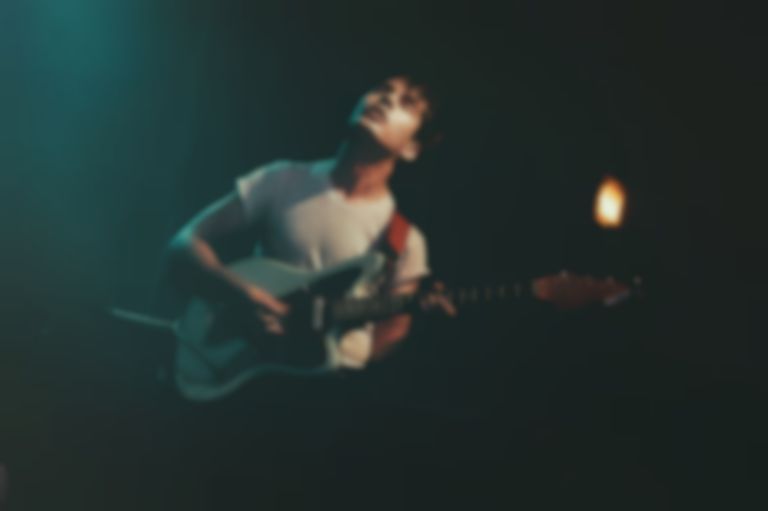 “What’s in a name? That which we call a rose / By any other word would smell as sweet”, muses a conflicted Juliet in William Shakespeare’s Romeo and Juliet. Her implication is clear to see - names have no impact on an object’s inherent essence.

Using Juliet’s logic, a band renowned for their live intensity will therefore remain just as intense regardless of their name. And on evidence of Preoccupations’ performance at The Haunt, the band formerly known as Viet Cong, remain just as ferocious as before.

While this ferocity was seen throughout the Canadian four-piece’s eleven song set in Brighton tonight (9 November), highlight “Select Your Drone” epitomised the vigour with which Preoccupations played. On Cassette EP, “Select Your Drone” politely shakes hands with bustling dynamics. In the live setting, however, the band wholeheartedly embraced its unworldly potential for destruction. Glistening, psychedelic guitars and Matt Flegel’s soft mantra were torn from the track’s fabric in order to be savagely replaced with a deluge of wailing guitars and violent crescendos.

“Select Your Drone” marked only one of many examples of sheer intensity within a performance characterised by unrelenting attack, dynamic sonic shifts and heady abandon. This attack was pertinently indebted to a masterful control of tempo, tone and texture. A chaotic “Silhouettes” and a howling “Stimulation” (which featured a finale of machine-gun snares), for example, were delivered at breakneck speed. Importantly, Preoccupations did not solely rely on stupefying tempo to dazzle their audience, but successfully bolstered their sonic assault with a loud wall of shifting distorted tones and glacial synthesisers. This control of tone and texture therefore allowed slower tracks such as “Anxiety” with its funereal march and the sensual groove of “Continental Shelf” to stand brightly alongside the pacy motorik rhythms of “Degraded”, “Silhouettes” and “Stimulation”.

The set also successfully underlined Preoccupations’ ability to playfully toy with the constructs of post-punk and thus create labyrinthine compositions. The sprawling “Memory” glided seamlessly between jangling guitars and mutated electronic samples, before giving way to an exhilarating disco stomp and soaring, reverberating guitars. Likewise, although bereft of its introductory, distorted bombardment, a hypnotic rendition of “March of Progress” burst to life, (accelerating at will) with a series of duelling, kaleidoscopic guitar lines and shuffling hi-hats, as Flegel screamed, “what is the difference between love and hate?”.

So much of Preoccupations’ attack and electric, post-punk energy relied on Mike Wallace’s impeccable drumming, which at times verged on the super-human. Wallace gracefully manoeuvred between furious rolling toms, electronic samples and scintillating hi-hat rhythms, which all acted at times as the propulsive energy behind a plethora of the tracks performed.

It would however be unfair to single out Wallace, when the band proved to be such a remarkably tight unit. Set closer, “Death”, aired in all its uncompromising glory, saw the four-piece wildly attack their instruments, with each member controlling and shaping the release and sustain of their individual weapons to create a plethora of vicious tones that crucially complemented and developed the surrounding pandemonium. Likewise, the interlinking combination of “Monotony” and “Zodiac”, further acted as a monument to Preoccupations’ ability, as the tracks moved from syncopated drums, to noise breaks and then finally into a section of feral, scratchy guitars and sonic chaos.

It was interesting to witness the online backlash regarding Preoccupations’ name change. Many greeted the change with negativity and derision, with some also predicting a subsequent decline in the quality of their creative output. In Brighton, however, Preoccupations emphatically proved that name has no bearing on a band’s true calibre. In fact, if you are this good, you can be called anything you like. Loud, menacing and wildly thrilling, Preoccupations’ set at The Haunt was an exercise in sonic obliteration.