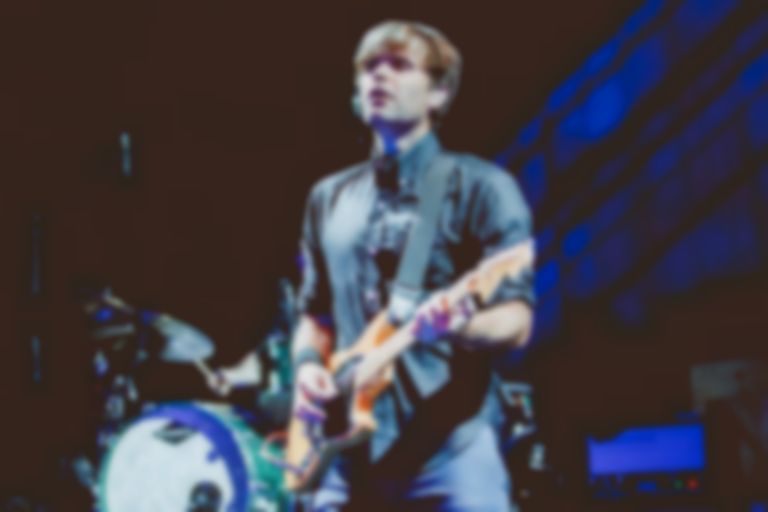 "This band is called Death Cab For Cutie. We're from Seattle, Washington."

Beyond that, there's no introduction of the individual members at the Birmingham Academy tonight (5th November) and, therefore, no allusion by Ben Gibbard - or anyone else for that matter - to what should be the elephant in the room; Chris Walla, the man who's contributions were so pivotal to carving out this group's sound from album to album, is no longer part of the setup. He left, last summer, after completing instrumental work on Kintsugi - the band's latest LP - but also, crucially, after having relinquished the producer's position.

The decision left Death Cab at a crossroads: shorn first of the producer so crucial to their records and then of their live guitarist, it's no small tribute to Walla that his old colleagues have had to draft two new pairs of hands to replace him. Dave Depper is in on guitar and Zac Rae takes his bow as the group's first live keyboardist proper: last time out, on the Codes and Keys tour, Walla would man both stations with an admirable dexterity.

Kintsugi is named after the Japanese art of repairing broken ceramics with gold; apt, in terms of both the thematic ground it covers - the collapse of Gibbard’s marriage features prominently - and the circumstances of Walla’s exit. Rumours that his departure had lent the band some kind of irresistible rock and roll energy have been greatly exaggerated, though. The party line would have you believe that because Walla, never a born live performer, didn't ever quite seem to lock into rock-out mode in the same way as Gibbard, bassist Nick Harmer and sticksman Jason McGerr did, Death Cab are now a noisier proposition without him. In actual fact, this new iteration of the group doesn't necessarily seem any more aggressive; just sharper, fitter. The new material is taut; Kintsugi plays like a long lament to Gibbard's ill-fated stint in Los Angeles, and he tears through the likes of "No Room in Frame", "Black Sun" and "The Ghosts of Beverly Drive" with an urgency that suggests he'd prefer to keep the memory fresh.

Death Cab have always prided themselves on two-hour sets that run the gamut as far as their back catalogue's concerned, and that remains the case on this jaunt. Gibbard penned "Why You'd Want to Live Here" the best part of fifteen years ago as a tongue-in-cheek pitch against a girlfriend moving to L.A.; its new-found prescience is related in the crispness of its delivery ("you can't swim in a town this shallow! Cos you will most assuredly drown tomorrow!") "Title and Registration", meanwhile, is plucked from the band's standout LP, and the quiet humour of the lyrics still strikes a chord ("the glove compartment is inaccurately named, and everybody knows it.") "No Sunlight", sonically bouncy but lyrically bleak, makes a relatively rare appearance, as does "Passenger Seat", a stripped-back, piano-driven example of Gibbard at the top of his written game.

Most impressive, though, is just how lean this performance feels. Two things are evident in abundance; one, that this set has been very well honed in rehearsal, and two, that anything extraneous has been cut away. "I Will Possess Your Heart" sprawls to eight minutes in length, but doesn't feel spun out. "Cath..." - which in itself is a more lyrically concise take on an older Death Cab track, "Company Calls Epilogue" - sounds thunderous as the guitars cascade over Gibbard's tightly-written tale of a woman marrying the wrong man. At long last, too, "Bixby Canyon Bridge" makes a live return to close the set; this particular song, which opens the band's bleakest album in Narrow Stairs, details Gibbard's messy divorce with his idolisation of Jack Kerouac against a veritable cacophony of reverb.

The acoustic "I Will Follow You Into the Dark" kicks off the encore; it's the track probably best known to tonight's casual observers (and my word, are they out in force.) "Company Calls Epilogue", would you believe, makes a rare appearance too, shorn of the despondency and anger that a mid-twenties Gibbard lent to it but retaining its melodic appeal. The truth is, this is a group playing in a room that holds two thousand people, but that have also headlined Madison Square Garden across the pond in recent months. Their most comfortable territory now lies in sweeping drama - the closing one-two of "Marching Bands of Manhattan" and "Transatlanticism" should be enough to bring that home - but they fire off tonight's show with a concision and intelligence that could fool anybody into believing that they'd tailor-made this set for theatre audiences. Are they still the real Death Cab, without Walla? In the studio, an enormous question mark looms. On stage, though? If anything, they're sharper than they've ever been.