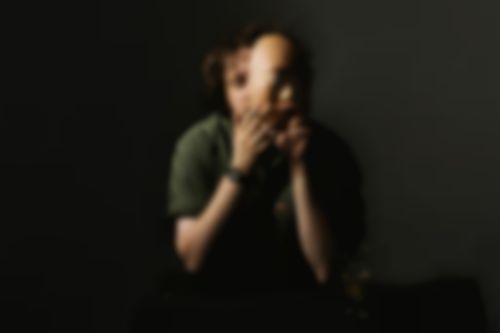 At first, the noise sounds like we’ve been launched into a techno show. Then we realise the sound isn’t something created by Daniel Lopatin for this performance as Oneohtrix Point Never: he smiles, laughs and the slow realisation dawns on everyone that all the dry ice in the sweatbox that is CCA Theatre 5 has set off the smoke alarms. The alarm stops and starts a further few times before we’re asked to leave through the emergency exits and spend ten minutes in a grotty lane in the Glasgow rain before being let back inside…and OPN finally begins his audio/visual experience.

Some hours on from Lopatin’s newly-created AV show, complete with digital images specially made for the music from OPN’s new album R Plus Seven by artist Nate Boyce, I’m still trying to find the right words to describe this music, and the digital images projected alongside. I’m tempted to simply direct you to this post from How To Dress Well on Lopatin’s latest record as he captures the beauty and near-incomprehensible amorphousness of it all a lot better than I might be about to. But here goes nonetheless.

From the very beginning, OPN’s mix of the unsettling and the pretty or playful captivates the audience almost as much as the digital projections do. As the choral sounds of ‘Still Life’ take shape, an image begins to form on screen; something like a birth out of mist, but this thing doesn’t seem to have conventional form. It’s like a phone, or a futuristic shoe, or a gun…and it moves about curious digital planes throughout the performance.

Just when ‘Still Life’ seems to be settling into Eno-like patterns, it begins to skitter and shake, and take on its own unconventional forms. Vocals samples appear, then free-jazz synths, and it appears to be constantly changing and interacting with itself and the audience. And that’s the thing: although these are songs from R Plus Seven, they’re being bent and played, and changing as much as Boyce’s on-screen images. Change is the key here – it’s a relief these images aren’t simply flashing and changing drably in time with the music.

There are versions – I think – of ‘Americans’ and ‘He She’ which constantly shift and never settle, and what sounds like a re-tooled version of ‘Russian Mind’ which plays as names of US towns appear on-screen, but then the jittery and pulsating house beats of ‘Zebra’ are instantly recognisable and we’re almost at a point where we could actually start dancing to this music. It’s really quite something: to me, OPN’s music is about as futuristic as you can get.

As partially-recognisable brand fonts from times past are flashed up on screen, I think of broken and abandoned 20th century technology trying to make itself heard above the pure and clinical white noise of a piece of Apple technology, a kind of music that looks back but in the most forward-thinking way possible.

It’s this clash that makes OPN’s music so beautiful and unsettling – we’re faced with chest-rattling bass one moment, then the next it’s arpeggiated passages of keyboards which engage both emotionally and intellectually before gorgeous choral and organ movements soothe. We get the latter during the gig’s best moments; the organ stabs of ‘Boring Angel’ are stunning, and the closing near-symphonic glide of ‘Chrome Country’ is ridiculously wonderful.

I’ve still no idea what the eff was going on with some of Boyce’s images: there were horrific 3D sculptures, chairs, hands and rolling spheres, and I’m no closer to working out what that phone/gun/shoe hybrid was. But, whatever it was the images did just seem to work perfectly with OPN’s music. As for that music? Nope, I still don’t think I’ve found the right words and in some way I think that says something about how OPN is working at a level very few artists are at…but my goodness, it’s a bit special.